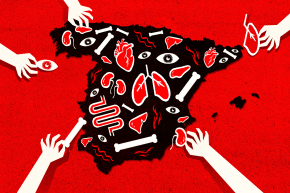 How Did Spain Get So Many Organ Donors?
By Alexandra Ossola

How Did Spain Get So Many Organ Donors?

Can the U.S. learn something from the world's leader in transplants?

If you need an organ in the U.S., there’s a much better chance you’ll get one than if you lived somewhere else. In 2016 there were more than 33,000 organ transplants; a 2015 survey from the World Health Organization estimated that the U.S. ranked third in the world, though there are still 119,000 people waiting for a transplant.

The country that ranks number one, however, is Spain, with 101 transplants per million people (compared to 93 in the U.S.). It’s taken decades of concerted, continued effort for Spain to become the world’s leader. As U.S. health officials strive to increase the number of transplants that happen within its borders, some are turning to Spain as a model.

The Spanish government has been working on increasing its transplant numbers since 1989, when it created an agency called the Organizacion Nacional de Trasplantes (ONT) to coordinate donations and transplant activities. In the decades since, it has established an opt-out program in which it’s assumed people will be donating their organs — families have to explicitly tell health care staff if they want don’t want to participate.

Another major change: who donates organs. They can come not only from patients who are braindead, which is standard across the world, but they can come from “non-traditional” donors, such as patients who have died of drug overdose, certain types of cardiac death, and older patients, too. Because of these measures, Spain doubled the number organs donated from deceased donors within a decade. The agency’s successes and continued challenges are detailed in a review published last Monday in the American Journal of Transplantation.

It’s hard to envision some of these programs working in the U.S., says Anil Chandraker, the president of the American Society of Transplantation. An opt-out system of organ donation would be a hard sell because our legal system is built on the idea that a person’s body, once dead, belongs to the family. In Spain, and in other countries like Belgium and Austria, civil law deems a body to be the property of the state. “There are ways around that, but that is a fundamental legal issue that would require a change in the understanding of the rights of families and states to do this,” Chandraker says. Plus, it’s not clear that an opt-out system gets more donations — other countries such as the Netherlands that have implemented the system haven’t improved their transplant rate, he adds.

More importantly, another thing that would have to change is who pays to care for dying patients. In places like Spain that have a single-payer healthcare system, healthcare providers might move a dying patient to the intensive care unit, increasing the level of care before they are braindead with an eye towards preparing their organs to be donated.

That might not go over so well in the U.S., says David Klassen, the chief medical officer at the United Network for Organ Sharing. Because healthcare is privatized in the U.S. the patient’s insurance would have to pay for those non-lifesaving procedures. And there are ethical concerns, too.

“The organ donation system [in the U.S.] is a voluntary one, so maintaining trust in the system is extremely important,” Klassen says. “I think people need to be confident that when a patient is in the hospital that the focus of the hospital is to manage any illnesses with the focus of saving a person’s life. When you potentially start managing patients’ care prior to death with the intent of them becoming organ donors, there’s an ethical subtlety there that we have to appreciate.”

Spain may have the highest organ transplant rate per capita in the world, but it — along with pretty much every other country — is still faced with more demand for organs than supply. Both Spain and the U.S. are exploring new donation criteria for older patients or those who died of heart issues or drug overdoses, though the push is much more aggressive in Spain, Chandraker says, because it’s more culturally acceptable there. Both are also exploring new techniques to make sure donated organs are in good condition and actually extend the lifespan of the recipient.

So, progress is happening. But one thing is clear—the U.S. isn’t Spain.