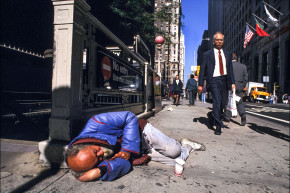 Income inequality has skyrocketed in the United States since the 1970s, with the top one percent controlling an outsized share of the nation’s wealth. But how to convince wealthy people — who have the most to lose and also hold the most of power — that this needs to change?

The answer, according to new research that used professional actors on the streets of Boston’s most affluent neighborhoods, is to have other rich-looking people talk to them.

Harvard University researcher Melissa Sands sent actors to survey more than 2,500 people on the streets about the idea of a millionaire’s tax, a policy proposal designed to redistribute wealth from the rich to the poor. Half the time, the actors were smartly dressed to match the people they were talking to, but otherwise the actors looked like they lived in poverty.

The idea was to see how people would respond to surveyors based on how they looked. The recent four-decade spike in income inequality has happened as more people move to cities, where homelessness and other signs of poverty are often apparent even in the wealthiest neighborhoods. This means that income inequality isn’t an invisible issue, and the question is how daily little interactions between wealth and poor affect people’s thinking. Does first-hand experience of income inequality make people more or less compassionate?

“When I first set out to study this topic, I anticipated an empathetic response,” Sands told Vocativ in an email.

But that wasn’t the case: People were more than twice as likely to sign the millionaire’s tax petition when another rich-looking person approached them, compared to when a poor-looking person did. Whatever motivations one might expect to make people more open to helping the poor — empathy, compassion, guilt, or even just shame at having to look someone less fortunate in the eye and saying they didn’t want to help — didn’t appear to work.

“I subsequently learned of a number of new studies that suggest that individuals respond negatively to inequality — they become less generous, more anti-social,” said Sands. “In that context my findings aren’t so surprising.”

In her paper, Sands gives several potential reasons to explain this result. It’s possible, she said, that the sight of poor-looking reminded people of their relative wealth and made them more protective of it (several respondents did refuse to sign the petition either because they were millionaires or expected to be ones soon).

It’s also possible that the sight of a person living in poverty made people stop thinking of income inequality as a societal problem and rather as an issue of individual success and failure. For example, affluent white people signed the millionaire’s tax petition more often when talking to a black actor who looked poor than a white actor. This may be, Sands cautiously suggests, because people believe they have a greater knowledge of a person’s situation when he or she is of the same race — so a rich white person could be less willing to “absolve” a poor white person of responsibility for being poor. But she says this might be specific to left-leaning blue state cities like Boston and more research is needed.

Sands plans to expand her study of how income inequality shapes people’s perceptions and hopes other researchers will join these efforts. At a time when fighting income inequality is falling out of favor, knowing what to say and do to get people on board with the idea has rarely been more essential.