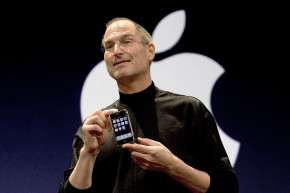 The iPhone Was Unveiled 10 Years Ago, Now Is Its Dominance Ending?
By Alejandro Alba

The iPhone Was Unveiled 10 Years Ago, Now Is Its Dominance Ending?

It’s been a whole decade since Apple introduced the first iPhone to the world. On January 9, 2007, the late Steve Jobs took the stage at the Macworld convention in San Francisco to announce a smartphone that would quickly become the most popular worldwide.

The first generation iPhone was an 8GB, 11.6mm thick model exclusive to AT&T, and it cost $599 on a two-year contract. Apple has sold 14 phones since then, with the latest being the water-resistant iPhone 7 and iPhone 7 Plus. Each year, the company has been upgrading and redesigning the iPhone to keep appealing to the masses and maintain its leadership in a smartphone market that became more crowded with each passing year.

Jobs said in 2007 that the iPhone was “literally five years ahead of any other mobile phone,” and it stayed that way for many years. A few years ago, Apple was the first to introduce a smart voice assistant, with the launch of Siri on the iPhone 4S in 2011. The company proved once again that it was innovative in 2013 when it launched the iPhone 5S with Touch ID sensors, which used biometric technology so consumers could use their fingerprints to unlock the phone.

But today it seems that other phone manufacturers have all caught up and the iPhone is now often the one behind. The most recent iPhone 7 has failed to impress many people and was criticized for not offering anything new, but rather upgrading to features that other phones already had — like the water-resistance feature previously introduced by Samsung. Apple is expected to reveal some sort of augmented or virtual reality feature with the iPhone 8 — rumored to come out in September — but that is also something that Samsung and Google have already offered with their phones for a couple years.

If something new and innovative like the original iPhone were to be released today, would it be a hit? Is it even possible to have a hit smartphone in a saturated market, where it seems devices do all that we ask for and more? Or will the form factor have to change completely to truly change the market?

In recent years, up-and-coming tech companies with new smartphones have struggled to compete in the United States. Companies such as Google and China’s Huawei have tried being contenders, but the majority of smartphone sales keep going to the established companies such as Apple and Samsung.

Apple is already working on the iPhone 8, which is expected to be announced next September based on the company’s traditional release cycle. There have also been leaks of the “iPhone7s,” which might be announced in March or April. We’ll have to wait until then to see if Apple is still capable of releasing something groundbreaking and can surge in sales once again.