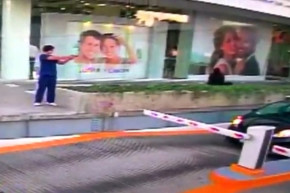 The diplomat is said to be in a stable condition

Mexican officials said Sunday that they’ve arrested an American national on charges of shooting and wounding an American diplomat in the western city of Guadalajara a day earlier. The gunman’s identity has not been released.

The 13-year foreign service officer was named by media as Christopher Ashcraft, though U.S. authorities refused to confirm the consul’s identity in order to protect his privacy. He was in a stable condition after being shot in the chest outside a mall by a gunman wearing dark blue medical scrubs.

Closed circuit television footage posted on the Facebook page of the U.S. Consulate in Mexico shows the gunman loitering at the shopping plaza before the official’s black car appears, at which point the gunman shoots directly through the car’s window before fleeing the scene.

“My thoughts and prayers remain with this officer and his family during this difficult time,” U.S. Secretary of State John Kerry said in a press release, adding that he appreciated Mexico’s “swift and decisive arrest of a suspect in the heinous attack.”

The U.S. embassy said that it had worked in coordination with Mexican authorities to locate the gunman, offering $20,000 reward for information on the suspect, and that it would continue to help in the investigation of the incident.

Mexico was scheduled to extradite the suspected gunman on Sunday.