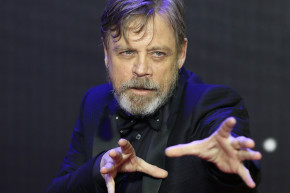 Following up on an idea first tweeted by comedy writer Matt Oswalt, then encouraged by his brother, comedian Patton Oswalt, Mark Hamill released the first of a series of Trump tweets read in the voice of the iconic villain on Saturday.

Calling himself the Trumpster, Hamill read out Trump’s infamous New Years tweet, where the president-elect wished his “many enemies” a happy New Year, in the most diabolical way.

Hamill then told his fans to “stay tuned,” promising more Trumpster soundbites in the near future.

Mark Hamill, who’s most famous for his role as Luke Skywalker in the Star Wars films, first voiced the Joker in Batman: The Animated Series, back in 1992 — and returned to the role many times since, most recently in the Justice League Action TV series and Batman: Arkham series of video games.

At present, Donald Trump has not yet called Hamill an unfunny or failing actor on Twitter, but there’s still time.