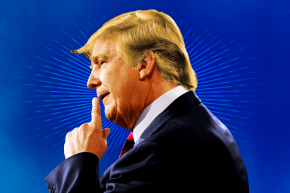 While he didn't admit who hacked the DNC, Trump insists Russia didn't get him elected

Hours after concluding his meeting with the U.S.’s top intelligence officials, President-elect Donald Trump didn’t immediately continue his previous denial that the Russian government was behind the election season hacking of the Democratic National Committee.

Trump did, however, promptly issue a statement contradicting the report’s scope.

His statement, which was emailed to the media around 2:30 P.M., claimed that regardless of who was behind the hacks, they caused “absolutely no effect on the outcome of the election.”

However, the Office of the Director of National Intelligence (ODNI), which prepared the report, explicitly said they never attempted to judge how many votes Russia might have swayed — just that it was Russian President Vladimir Putin’s intent to favor Trump over his opponent, Hillary Clinton.

“We did not make an assessment of the impact that Russian activities had on the outcome of the 2016 election,” the report read. “The US Intelligence Community is charged with monitoring and assessing the intentions, capabilities, and actions of foreign actors; it does not analyze U.S. political processes or U.S. public opinion.”

It would likely be impossible to determine how many voters stayed home or chose Trump over Clinton because of the hacks, as well as their subsequent news coverage, especially in Russian outlets like RT, which the report called “a platform for Kremlin messaging.” Clinton lost by 74 electoral votes — a minimum of at least two states — though she received more total votes than any American presidential candidate in history save President Obama in 2008. She received 2.8 million more votes than Trump.

ODNI, which presented the report to President Obama on Thursday, made a declassified version available to the public late Friday afternoon. It contains few genuine revelations not previously reported in the news, though it’s noteworthy for breaking down the independent major intelligence agencies’ conclusions. The CIA and FBI both have “high confidence” that Putin ordered a hacking campaign to injure Clinton’s campaign. The NSA, which intercepted messages of senior Russian officials celebrating Trump’s win, expressed “moderate confidence” in that conclusion.

The report maintains, also with high confidence, that the online character Guccifer 2.0, who had claimed to be a Romanian hacktivist while slowly dispensing various documents stolen from Democrats’ servers, was a tool of Russian intelligence to disseminate those files. Vocativ reported in July that Guccifer 2.0 was lying about his identity and likely Russian, and in September that he seemed to leaking information about Democrats specifically in states vital for a Trump victory.

Trump added in his statement “that there was no tampering whatsoever with voting machines.” That, however, wasn’t even up for debate. It wasn’t mentioned in ONDI’s report, and prominent voting experts, as well as FBI Director James Comey, proclaimed before the election that a major attack on the U.S.’s physical voting machines was unlikely. Subsequent audits found no evidence of foreign tampering.