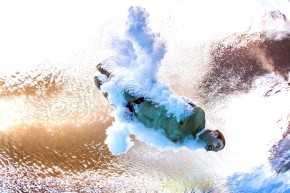 The next Summer Olympics won’t be here for another three years, but that hasn’t stopped a pair of Australian researchers from claiming dibs on a surefire way to “revolutionize the sport of diving.” All thanks to math, no less.

In a paper released last month on the site arXiv, where papers are posted prior to peer-review, University of Sydney mathematicians William Tong and Holger Dullin sketch out a method of extending the number of complex moves a world-class athlete could be capable of when attempting a 10-meter dive. Their creation, called the 513XD dive (in accordance with the sport’s naming guidelines), consists of 1.5 somersaults and 5 twists.

Though their initial biomechanical model estimated that the 513XD dive would take 1.8 seconds to complete, a smidge more than the approximate 1.6 seconds a typical dive (coupled with jump) takes, the authors noted that there are numerous ways for a diver at the height of their physicality to close the gap. For instance, by getting a large amount of angular momentum going.

“This leads us to conclude that real world athletes can in principle execute the 513XD dive,” they wrote in the paper, first noticed by MIT Technology Review.

The 9-stage dive starts off with a somersault, with arms fully extended. As with typical twisting somersaults, the athlete first drops an arm to the side (the left in the pair’s model), which allows them to achieve a twist. But then they bring it back up as they lower their right arm at the same time, which ramps up their twisting ability. Then they bring up the right while dropping the left, and once more bring up the left while dropping the right. Lastly, they end with their arms fully extended as they dive straight into the water, ending the twisting motion — all while still completing their one-and-a-half somersaults.

Using on-again, off-again arm motions as a way to generate more twists from a somersault should be applicable to other aerial sports, particularly those that aren’t as limited by the amount of hangtime a person has, the authors said. And future models based on the basic principles devised by Tong and Dullin could possibly incorporate other diving moves, like pikes and tucks.

Of course, we shouldn’t get too ahead of ourselves here. The 513XD dive is completely theoretical right now. Still, if any enterprising divers are trying to make a splash come this 2020, they’re more than able to reach out to Tong and Dullin for some pointers.