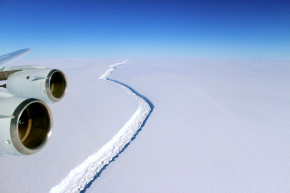 Iceberg Bigger Than Rhode Island About To Break Off From Antarctica

An 80-mile crack in the ice on Antarctica’s northernmost peninsula is growing fast, and it’s now a virtual certainty that a massive iceberg is going to break off sometime in 2017, according to Antarctic researchers. The iceberg itself will be nearly 2,000 square miles in area, substantially bigger than Rhode Island, but that’s just the beginning of what figures to be tumultuous times for the Antarctic ice. The breakup could destabilize the entire ice shelf, which could add four inches to global sea level rise all by itself.

Ice shelves represent a kind of uneasy buffer zone between ice flowing from glaciers on land and the relatively warm ocean waters. They float frozen atop the water, absorbing ice as it moves down toward the coast. Although they can last for millennia — parts of this ice shelf date back some 10,000 years — ice shelves aren’t permanent, unchanging fixtures, with the water below and the air above below both gradually melting and breaking off pieces. And while the researchers at the British Project MIDAS say this breakup is, broadly speaking, a naturally occurring event, they do acknowledge that climate change has likely accelerated the timing. Both the air and the ocean currents are likely warmer than they would be normally, creating a two-pronged attack on the ice shelf.

Located several hundred miles south of the Tierra del Fuego region of Argentina, the Larsen Ice Shelf has been crumbling since 1995. The first part of the ice shelf, Larsen A, disintegrated in that year, with the larger Larsen B following in 2002. The remaining segment, Larsen C, is roughly the size of Maryland. It’s there that a giant rift has been steadily growing over the past decades, though it’s only in the past several months that it’s broken through to the surface. There’s now only about a dozen miles of unbroken ice left. The iceberg won’t immediately take the rest of the ice shelf with it, but it will likely weaken the structure of Larsen C enough to make its days officially numbered.

An iceberg measuring 2,000 square miles would be one of the 10 largest ever recorded, and about half the size of Iceberg B-15, which broke off from the Ross Ice Shelf in 2000 and was about the size of Jamaica. When it does break off, the iceberg will gradually float northward, cooling the water as it goes. Ironically, that could mean another increase in Antarctic sea ice, which has been held up by climate change deniers as evidence against a warming Antarctic. It ultimately run aground on the remote island of South Georgia, where the discoverer of the ice shelf, Norwegian explorer Carl Anton Larsen, happened to spend most of his days.

If and when that iceberg breaks away, there will be nothing left to absorb the glacial ice as it migrates toward the sea, meaning way more ice will melt directly into the Southern Ocean, causing sea level rise. This is a long-term problem but a warming world can escalate situations quickly. After the disintegration of Larsen B, researchers assessed the state of Larsen C in 2004 and concluded it appeared stable for the foreseeable future. Thirteen short years laters, it could be on the verge of disappearing forever.