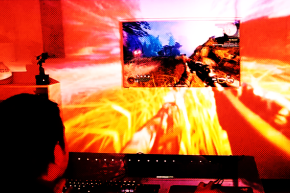 Your Room Is The Battlefield, With This High-Tech Game Projector
By Alejandro Alba

Your Room Is The Battlefield, With This High-Tech Game Projector

The next level of gaming is leaping beyond the TV

Gaming has evolved with new technology such as virtual and augmented reality, but Razer is taking PC gaming to another level with projections.

Razer’s latest Ariana Projection Concept, which was unveiled at the Consumer Electronics Show this week, will project video games past the TV screen and flood your entire bedroom with whatever game it is you’re playing — it seems extremely immersive.

Ariana is essence is just a simple 4K projector that can be also used to watch movies or give a Power Point presentation, but it’s most impressive when playing video games.

In order to expand past the PC screen, the Ariana projector uses a 155-degree fisheye lens and two depth-sensing cameras to detect furniture in the way and tweak the image to avoid distortion.

One issue that comes to mind with Ariana is space. It’s unclear how big the room has to be or if the gamer has to be sitting at a desk. It’s highly unlikely that the projector could work in a tiny New York City apartment or shared space.

Ariana will work through Razer’s Chroma system, which is software that communicates with the game to create real-time lighting and video effects. Other third-party companies that can use Chroma include Lenovo and Nanoleaf, which use the system to power their smart lights.

The concept has yet to receive a release date or a price, but it’s already being demoed by gamers, tech enthusiasts and journalists.