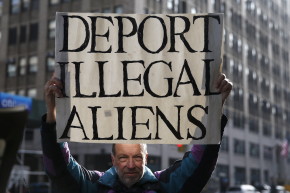 An activist holds a sign at an immigration rally in New York City — REUTERS
By Shane Dixon Kavanaugh
Jan 07, 2017 at 8:00 AM ET

Conservative lawmakers are moving to strike back against local governments and universities that have vowed to help shield undocumented immigrants from deportation under the incoming Trump administration.

House Republicans have drafted at least three bills aimed to strip federal funding from so-called sanctuary cities and campuses, which are emerging as a bulwark against the president-elect’s harsh proposals on immigration. The moves signal a willingness by Congress to wade into a looming political and legal battle that the White House will lead.

“Too many mayors and local governments think that they are above federal law and place their own ideology ahead of the safety of their residents,” said Pennsylvania Congressman Rob Barletta, who introduced the Mobilizing Against Sanctuary Cities Act on Thursday. “One of the principal duties of the government is to protect its citizens, and the idea of sanctuary cities runs completely counter to that responsibility.”

Rattled by Donald Trump’s pledge to immediately banish as many as three million undocumented people from America’s borders, dozens of liberal-leaning cities and counties have said they will refuse to aid federal law enforcement dispatched to deport them. Colleges and universities around the U.S. have adopted similar positions, including California’s public university system, the largest in the nation.

The growing resistance could hinder Trump’s ambitious immigration crackdown, which fueled his run for the White House. Twelve of the largest American cities that call themselves immigrant sanctuaries to date are home to nearly 20 percent of all undocumented immigrants in the U.S., a Vocativ analysis found.

Under Barletta’s proposal, Congress would stop all federal funds from flowing to states or localities which resist or ban enforcement of federal immigration laws. The measure is similar to one introduced last month by Maryland Republican Andy Harris, which would deny federal dollars to any entity that refuses to comply with U.S. Immigration and Customs Enforcement — including higher education institutions.

More California Plans To Protect Millions Of Immigrants From Trump

Attempts to strip federal funding from sanctuary cities by Republican lawmakers, who have controlled both chambers of Congress since 2014, repeatedly failed during the Obama administration. Conservatives, however, remain optimistic that the political calculus will shift in their favor under Trump’s White House.