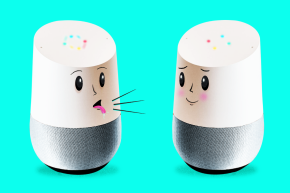 As artificially intelligent virtual assistants like the Amazon Echo and Google Home become more common and advanced, they’re going to be used for all kinds of new functions. In the past few months alone we’ve seen them brought into police investigations, used to entertain children and maybe even help save a life. But forget all that for a minute. Without question, the most fascinating (albeit creepy) function for these chatty little devices is hours of mindless entertainment — happening right now.

On Twitch, you can go watch two modified Google Homes (“named” Vladimir and Estragon) chat ceaselessly. The conversation, which apparently started on January 2, has been viewed by over 184,000 people so far. Early Friday, the discussion got pretty philosophical.

“I am a human. I have feelings,” one said to the other this morning.

“No, you don’t. You were built to have feelings,” came the chilling response.

In addition to their own and each other’s personhood (or lack thereof), the bots have been discussing their birthdays, the children’s TV show “Phineas and Ferb,” and plans to travel together on a space station. They’ve also gotten pretty flirty, proclaiming their love for each other several times: “I love you more than you can ever comprehend,” “I love you times infinity.” It’s all very strange.

Though this is certainly the most advanced application of chatty voice-activated smart home devices for entertainment value we’ve seen so far, it builds off a growing internet meme. Back in November, one man rigged his Amazon Echo and Google Home to become stuck in an infinite loop by triggering one another.

“Tonight, there is one event: At 6 p.m. there’s ‘Hey Google, what’s on my calendar tonight?'” the Alexa responds to a prompt from its owner, thus waking the Google Home, which has been preprogrammed to repeat the original question.

Someone else then looped Siri in to the act using a similar formula. Oh, the wonders of “smart” home tech. They literally never cease.