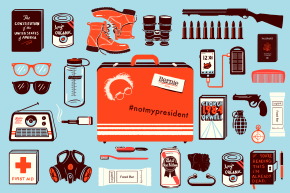 Liberal Preppers Stock Up On Guns, Food As Trumpocalypse Looms

With Trump on the horizon, the survivalist movement — long a pastime of the right — is picking up progressive converts fast

An unapologetic liberal, he was no fan of firearms. He had never owned one before. But Waugh, a 31-year-old from Independence, Missouri, couldn’t shake his fears of a Donald Trump presidency — and all of the chaos it could bring. He imagined hate crimes and violence waged by extremists emboldened by the Republican nominee’s brash, divisive rhetoric. He pictured state-sanctioned roundups of Muslims, gays, and outspoken critics.

“I kept asking myself, ‘Do I want to live under tyranny?'” said Waugh, who supported Bernie Sanders in the Democratic primary and later backed Hillary Clinton. “The answer was absolutely not.”

With Trump now days away from assuming the White House, Waugh’s preparing for the worst. He’s made “bug-out bags” stuffed with ammo, energy bars, and assorted survival gear for his wife and their three cats. He’s begun stowing water and browsing real estate listings in Gunnison County, Colorado, which he’s determined to be a “liberal safe-haven.” Last month, Waugh added a 9mm handgun to his arsenal.

His advice to others on the left fearful of the next four years? “Get ready. Pay attention. Keep your wits about you.”

Waugh’s not alone. He is among a new cadre embracing extreme self-reliance in the wake of Trump’s surprising victory. Long a calling among conservatives spooked by big government boogymen and calamitous natural disasters, the so-called prepper movement is gaining a decisively liberal following.

“We’re tired of being perceived as wusses who won’t survive when shit hits the fan,” said Stacy, a Texas Democrat who recently caught the prepper bug. She spoke with Vocativ on the condition we not publish her last name. “I, for one, don’t like to be thought of as some precious snowflake.”

After years cast as a fringe survival group, preppers entered a kind of golden age during the Obama presidency. A horrific housing crash and the spectacle of Hurricane Sandy helped give rise to reality television shows like Doomsday Preppers and Doomsday Bunker, and fueled a multi-billion dollar survival industry. Branded by some as a foreign-born, gun-grabbing socialist, Obama aroused deep suspicion among the patriot groups, right-wing conservatives, and apocalyptic Christians at the center of the growing movement.

Trump’s provocative posturing and unpredictability is now inspiring a fresh wave of panic on the left. Those who spoke with Vocativ have envisioned scenarios that could lead to military coups led by loyalists of the president-elect and internment camps packed with political opponents, bloody social unrest and an all-out civil or nuclear war. Sound bonkers? Perhaps. But, for many, so was the prospect of a President Trump.

“It’s the nature of the political beast,” said Kevin O’Brien, a conservative prepper and realtor who specializes in off-the-grid properties in eastern Tennessee. “Obama had many on the right really wound up. Now it’s the left’s turn.”

The signs of change are surely in the air. Groups that cater to gun-toting bleeding hearts — such as the aptly named Liberal Gun Club — say they’ve seen a surge in paid membership since the election. Candid talk of disaster preparedness among progressives is showing up on social media. Even companies that outfit luxury “safe rooms” — which protect their wealthy owners from bombs, bullets, and chemical attacks — attribute recent boosts in business to the incoming administration.

“I don’t think we’d have the same level of interest if Hillary had been elected president,” Tom Gaffney, whose fortified home shelters at Gaffco Ballistics run as high as $400,000, told Vocativ in an interview.

Looking for likeminded folks to weather the Trumpocalypse, Waugh started a private Facebook group called the Liberal Prepper shortly after the election. In nine weeks, it’s drummed up more than 750 members, all of whom are individually screened and vetted, Waugh said. Dozens more flock to it daily.

Few are wasting precious time. They trade tips on survival swag and solicit recommendations for solar panels, firearms, and raising chickens. There are discussions on homesteading and home safety. Links to news stories about the president-elect or signs of instability around the globe are never in short supply.

Occasionally, posts on the Liberal Prepper seem to veer close to parody. One debate thread last week centered around the merits of stocking up on recycled toilet paper rolls versus buying Angel Soft, a brand produced by Koch industries, a notorious climate change foe. And in another discussion, vegetarian and vegan members talked about the best meat- and dairy-free food supplies to have during a sustained crisis.

In a smaller Facebook group, Progressive Liberal Preppers, members who blacksmith, bow hunt, and operate ham radios are eager to teach their skills with others, said one the site’s administrators, who goes by the name of Blythe Bonnie. “The next thing we’re going to do is a class on home brewing and winemaking,” said Bonnie, a lifelong Democrat and 70-year-old now living in Arkansas.

While most of these liberal preppers say they are readying for any disaster — natural, manmade, or even zombie —  a doomsday scenario at the hands of a President Trump continues to be a primary concern.

“With the new administration I worry about Nazi-style camps that would include my wife, our twins and myself,” said Melissa Letos, who lives with her family on a five-acre spread near Portland, Oregon. In a recent interview, she said she raises chickens, strives to keep a year’s supply of canned food, and is able to hold her own with a firearm. She and her family plan to a build a bunker-style basement in the future.

Even as Letos and other liberals brace for bedlam, some longtime preppers worry that others in the movement have let their guard down. Michael Snyder, author of The Economic Collapse blog, recently warned against those on the right who seemed overly optimistic about a Trump presidency. “Everyone is feeling so good about things, very few people still seem interested in prepping for hard times ahead,” he wrote, raising the specter of financial instability in Europe and a potential trade war with China. “It is almost as if the apocalypse has been canceled and the future history of the U.S. has been rewritten with a much happier ending.”

For Waugh and his liberal peers, the apocalypse may have just begun. “Fear is an unfortunate catalyst for a lot of folks,” he said. “But there are still too many caught up in the idea that the system is infallible and that it will persevere and prevail.”