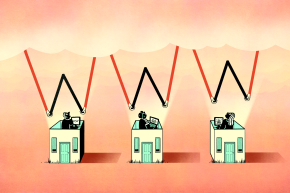 Under Trump, Lobbyists Are Poised To Dismantle Internet Privacy Rules
By Janus Kopfstein

Under Trump, Lobbyists Are Poised To Dismantle Internet Privacy Rules

In October, the Federal Communications Commission (FCC) passed rules that prevent large telecommunications companies from profiting from customers’ internet browsing data without their consent. Now, as the FCC changes leadership and President-elect Trump is about to be inaugurated, the industry is pushing to completely dismantle them.

The FCC rules were considered a major victory by privacy advocates when they passed the commission with a 3-2 vote. They require Internet Service Providers (ISPs) to obtain explicit opt-in consent from customers before sharing and monetizing their browsing habits, locations and other private data with third-party companies — a practice many major ISPs have quietly adopted as a second revenue stream, in addition to charging customers monthly fees.

Now, seeing an opportunity in the arrival of the Trump administration, lobbyist groups representing multi-billion dollar ad companies and internet providers are railing against the privacy protections. In a petition filed on Tuesday, the NCTA, a lobbyist group that represents large ISPs like Comcast and Charter Communications, demanded regulators dismantle the rules, calling them “untenable” and claiming they will “reduce consumer welfare, inhibit competition and stifle innovation.” The group is also spending millions of dollars to overturn the FCC’s hard-won net neutrality rules, which established the legal basis for the new privacy rules and prevented ISPs from creating “pay-to-play” schemes that prioritize traffic from some web sites and services over others.

On Wednesday, a collection of lobbying groups representing online advertisers filed a separate petition against the FCC rules. That complaint makes the incredible claim that blocking companies from collecting and selling their customers’ private internet data without their consent “violates First Amendment protections of commercial speech.”

Opponents further argue that the FCC privacy rules create a double-standard, since internet companies like Google and Facebook freely collect private data. But those companies’ entire business model is based on offering free services in exchange for collecting and monetizing data, whereas ISP customers pay for a service and don’t expect their private data to be sold.

FCC Chairman Tom Wheeler has also argued that ISPs are different because they control users’ internet connections, placing them in an especially powerful position to exploit the flow of data. “It is the consumer’s information, it is not the information of the network the consumer hires to deliver that information,” Wheeler said, after the privacy rules were passed last year. “What this item does is to say that the consumer has the right to make a decision about how her or his information is used.”

But just like the Affordable Care Act, the FCC privacy rules will almost certainly be dismantled after the new administration comes into power on January 20.

Earlier this week, the FCC lost its Democratic majority with the departure of one of its commissioners, Jessica Rosenworcel. Wheeler himself is also due to step down at the end of the month, leaving anti-regulation Republicans with a 2-1 majority at the Commission and the incoming Trump administration to appoint a new Chairperson to lead the agency.