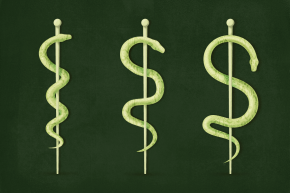 With congressional Republicans and the incoming Trump administration vowing to repeal the Affordable Care Act, one likely victim is the legislation’s Medicaid expansion, which enables previously ineligible people to receive Medicaid benefits.

If the expansion does go, it will be hard to argue it will be because of out-of-control costs: A new study from the University of Michigan has found that state’s Medicaid expansion under Obamacare will pay for itself, even as Michigan becomes responsible for a greater percentage of the costs.

In 2013, under the law, Michigan’s Rick Snyder became one of the handful of Republican governors to accept the federal funding to allow more people to be eligible for Medicaid. Snyder presented the move as bipartisan, arguing the Medicaid expansion was less about the virtues of President Obama’s signature legislation and more about looking out for his state’s low-income families. On Wednesday, Snyder publicly argued that Republicans should spare Michigan’s Medicaid expansion, even as the rest of the health care law is repealed.

The numbers here are especially persuasive. The state government is responsible for a small — between five and 10 percent — portion of the cost of the expansion, with the federal government set to pick up the rest of the tab. The researchers found that the number of new Medicaid recipients in Michigan stabilized at 600,000 in 2015. Those people will be, on average, healthier and more able to work than before, without having to spend nearly $500 in uninsured health expenses.

The finding is a variation on the old notion that prevention is better — and, often, cheaper — than cure. By giving low-income individuals and families the ability to get health care before every problem is an emergency, both they and the state of Michigan spend less on health programs intended to provide care for those with no other options. And that has a knock-on effect, as all that money saved can be spent elsewhere, boosting the state’s economy and creating more wealth overall. As the researchers point out, money not spent on health care can now bet spent on housing, transportation, and food, all of which generate an estimated extra $150 million in income and sales tax revenue for Michigan.

Taken together, Michigan will come out a whopping $432 million ahead in 2017. Even by 2021 — assuming the health care law still exists — when Michigan is paying for a greater percentage of the expansion, it is still estimated to make $132 million more than it pays in. The researchers acknowledge that not every state might seem the same benefits, especially states with lower tax rates like Texas and Florida. But this study still suggests that, at least for the Medicaid expansion, Michigan and the other 30 states that accepted federal funding are coming out ahead, while the 19 states that refused the expansion are falling behind.