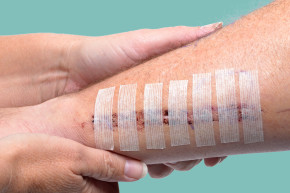 How Humans Could Heal From Wounds Without Scars
By Alasdair Wilkins

How Humans Could Heal From Wounds Without Scars

Humans might have a few biological advantages over the average fish or amphibian — bigger brains, spoken language, that sort of thing — but we’re far behind when it comes to dealing with wounds. Most fish and amphibians can regenerate damaged tissue so that it’s as good as new, whereas healing from even minor wounds can leave humans with scars. But new research suggests hair follicle cells might someday let humans unlock their healing factor at last.

It’s worth understanding just what a scar is. When an animal is wounded, special cells called myofibroblasts go to work to repair the damaged skin by reinforcing it with extra collagen, the protein that makes up skin tissue. The additional collage strengthens the skin, but there are tradeoffs, as the skin now lacks its ordinary elasticity, sweat glands, and hair follicles. When the wound is minor, the myofibroblasts die off, leaving behind healthy skin. That doesn’t happen in humans with bigger wounds, and so the result is a scar, a patch of permanently damaged skin missing hair and fat cells.

To get humans or other mammals to heal without scarring, the wounded skin would need to be able to regenerate scars into healthy skin tissue. Researchers at the University of Pennsylvania may have demonstrated a way to do that in a study with mice. When they placed those cells in a culture intended to promote the conversion of the myofibroblasts into fat cells — a necessary part of a complete skin repair — they found it worked, but only when the cells were linked with hair follicles.

Hair follicles could be important to the healing process because they expressed a pair of proteins that would then reprogram the myofibroblasts to become fat cells. The very fact that scar tissue in humans lacks hair follicles may be a big reason our skin can’t regenerate properly after a major wound.

The researchers were able to repeat this conversion in an experiment with human cell culture, suggesting this finding isn’t limited to mice and hinting that scar-free healing could one day be a possibility.