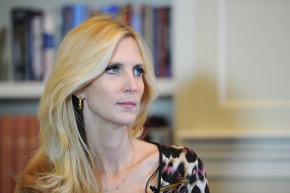 The conservative activist posted on Twitter a reference to the 14 Words, the mantra of white supremacist organizations across the world

Ann Coulter, the controversial conservative author and activist — and Donald Trump fan-girl — who frequently flirts with white nationalism, appears to have taken the plunge from far-right-wing punditry to full-blown white supremacy.

On Thursday, Coulter posted “14!” on her Twitter page. A number and an exclamation point may seem vague and innocuous, but it is symbolic of the mantra of white supremacist organizations across the world. It stands for The 14 Words, a creed written by white supremacist demagogue David Lane, a leading figure in the white supremacist group The Order until his 2007 death, and is exhaustively quoted by neo-Nazis, white nationalists, and the “alt-right.” It was also referenced by mass-murderer Dylann Roof, who killed nine people at a historically black church in Charleston, South Carolina last year and is currently in the midst of a sentencing hearing that could send him to death row.

The 14 Words are as follows: “We must secure the existence of our people and a future for white children.”

If there is any doubt that Coulter is referencing the white supremacist battle cry and not, say, her golf handicap, dozens of her more than 1.2 million followers actually wrote out the 14 Words in response to her tweet. Others posted heroic-looking pictures of Adolf Hitler and the numbers “88,” which, in neo-Nazi-speak, symbolizes “Heil Hitler,” as H is the eighth letter of the alphabet.

Playing devil’s advocate, people on social media are suggesting that Coulter is simply referencing the number of days until President-Elect Donald Trump’s inauguration, but the inauguration is on January 20th, which is 15 days away — depending on your definition of “day” — and there is no other evidence of a countdown; the only number of days Coulter seems concerned with in terms of a countdown to a Trump presidency just happens to also be a reference (read: dog whistle) to a rallying cry for white supremacists, who tend to support her political views, and to whom she’s been spending more and more time cozying up since Trump’s election.

Last month, Coulter went to a Christmas party hosted by the white supremacist website VDARE, according to the Southern Poverty Law Center, which tracks extremist groups and individuals associated with those groups. The party, according to the SPLC, was also attended by the who’s-who of various white supremacist movements across the country, including some of the deans of intellectual racism’s old guard like Jared Taylor and Kevin MacDonald, each of whom attended an “Alt-right” conference in Washington D.C. in November that infamously culminated in several of the those in attendance ending the night with a Nazi salute while bellowing “heil Trump.”