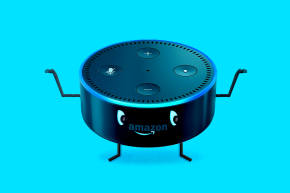 Amazon’s Alexa Is In All The 2017 Gadgets

Move over Siri. An army of new devices are using Amazon's voice assistant

Hey Alexa, what device are you not on in 2017? Many tech companies at this year’s Consumer Electronics Show that have been unveiling their latest gadgets and devices all have support for Amazon’s smart voice assistant Alexa.

Alexa was first introduced with the Echo, which is a smart home speaker that can assist consumers with simple tasks such as playing music, searching for stuff online and programming reminders. It can also control smart house appliances and order supplies on Amazon.

The voice assistant is now making its way to various third-party devices such as TVs, robots, cars and even refrigerators.

Some of the products announced at CES that already have Alexa built in include LG’s refrigerator, which has a 29-inch touchscreen and LG’s Hub smart home robot. Ford is installing an Alexa virtual assistant to its cars, and GE’s is making a LED Ring Lamp — essentially a speaker with a really bright lamp. There’s also several other Echo-like speakers that come with Alexa, such as Mattel’s kid-friendly Aristotle and Lenovo’s Smart Assistant.

Then there are the devices that have Alexa integrations and can be controlled by commands to the Amazon Echo, or its smaller alternative, the Echo Dot. Whirlpool has a new line of internet-connected washers, dryers, refrigerators and ovens that can be controlled with Alexa. ADT’s Pulse home security system, Samsung’s smart vacuum and Linksys’s Velop router system are also jumping on the band wagon.

All these devices hooked up to Alexa seems very risky, especially after recent news of Amazon receiving a search warrant demanding access to an audio recording transmitted to its servers by an Echo during a crime. Alexa is listening at all times, and it’s possible its information could be exploited by the government, hackers and other unknown entities.

Alexa now has 7,000 skills — the integrations it has with other devices and services — which is a drastic increase from the 1,000 it had last year. That shows that there’s definitely an interest in using Alexa from companies — despite the lack of presence of Amazon itself at the CES trade show this year. Alexa being on third-party devices could help Amazon become one of Apple’s biggest competitors since iOS users can’t use Siri on devices that are not in the Apple ecosystem.