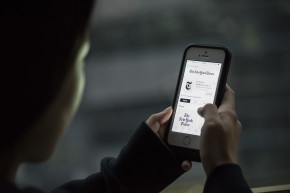 Apple pulled The New York Times’ app from its store in China after the restrictive government asked it to, saying Times’ app ran afoul of the country’s rules regarding internet content.

According to the Times itself, English and Chinese language versions of its app were removed just before Christmas, and following the paper’s investigation into a massive iPhone factory in the country that, the Times reported, has received billions in incentives from the Chinese government. The Times’ website has been banned in the country since 2012, and the app was one of several ways the paper was trying to get around the ban, according to a Quartz article from April 2015. China put out new regulations in June 2016 governing mobile apps, the Times said, that appeared to be behind the app’s ban.

In a statement to Vocativ, the Times’ spokeswoman Eileen Murphy called Apple’s decision to pull its app “deeply regrettable.”

“The request by the Chinese authorities to remove our apps is part of their wider attempt to prevent readers in China from accessing independent news coverage by The New York Times of that country — coverage that is no different from the journalism we do about every other country in the world, including the United States,” Murphy added. “We have asked Apple to reconsider their decision.”

An Apple spokesperson said that the app was “in violation of local regulations,” as “for some time now, the New York Times app has not been permitted to display content to most users in China.”

“As a result, the app must be taken down off the China App Store,” said Fred Sainz. “When this situation changes, the App Store will once again offer the New York Times app for download in China.”

Sainz did not respond to questions asking for specifics on what “content” the Times was not permitted to display. Apple’s own iBooks and iTunes stores were banned in China last April, about six months after they launched in the country.

Reuters noted that apps from other outlets whose websites were blocked in the country, such as CNN, The Wall Street Journal, and the Financial Times, were still available in the store.

While the Times has continued to report on China seemingly unabated by restrictions that could slow its own growth in that market, other companies have bowed to pressure and released alternate versions or their services (or were rumored to be working on them) to comply with Chinese regulations, finding the huge market there irresistible.

Google had a special filter for search requests in the country for several years until 2010, when it took its search tool out of the country entirely. Facebook is banned in China but a Times article said it was working on a “censorship tool” that would proactively block certain content from ever appearing on Chinese users’ timelines and could allow Facebook back in. And Apple itself was said to have blocked its own News app in 2015, which was first reported by — you guessed it! — The New York Times.