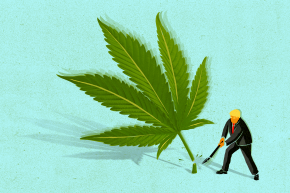 Weed Industry Under Trump Could Go Up In Smoke

The White House has announced that it plans to crack down recreational marijuana. Here's how it could wreak havoc on the multi-billion dollar industry

Update (February 24, 2017): The Trump administration on Thursday announced for the first time that it plans to crack down on marijuana sales in states that provide recreational weed, placing the growing multi-billion dollar industry in jeopardy. While the White House provided few details about what such enforcement would entail, Vocativ last month explored the ways in which the Justice Department — led by Attorney General Jeff Sessions, an anti-marijuana crusader — could wreak havoc on legal weed.

Colorado is home to five million people, 966 marijuana dispensaries, hundreds of 420-friendly hotels and Airbnbs, and at least one mobile cannabis lounge. The state, where recreational weed became legal in 2014, sold more than $1 billion in marijuana last year, funneling at least $151 million of that into government coffers — and generating  thousands of new full-time jobs, data shows. As a social experiment, regulated pot in the state has largely been a success: traffic fatalities have not increased, use among teens is down, and marijuana arrests plummeted by 95 percent.

All of this, along with gains in other legal weed states, could come crashing down with a new president in the White House.

If so inclined, the Trump administration has the power to bring the full weight of the Justice Department down on the legal marijuana industry, pounding it into submission while menacing those who’ve worked to build it into a social and economic juggernaut. Growers and dispensary owners licensed by legal weed states could face raids, arrests, and forfeited assets under an aggressive U.S. attorney general, who is likely to be Alabama Senator Jeff Sessions, a longstanding marijuana foe. Spooked investors could scatter from a venture that’s generated tens of thousands of jobs and billions of dollars in revenue. Even companies without a direct tie-in to the marijuana business would feel the blows of a full-fledged crackdown.

“The simple answer is that the new administration can take it all apart in a minute,” said Mark Kleiman, a professor of public policy at New York University and leading expert on marijuana legalization in the U.S.

It’s a prospect that few in the industry or legalization movement fretted over prior to November. Despite marijuana remaining a Schedule 1 drug — alongside the likes heroin and LSD — the Obama administration had largely kept federal prosecutors from interfering in state-legal pot activity. That decision, outlined in a Justice Department opinion called the Cole Memo, helped pave the way for legal weed initiatives in Colorado, Washington, and now six other states and the District of Columbia — and gave birth to what’s become a multi-billion dollar industry.

Even as Trump ran for president on a law and order platform he showed little interest in meddling much in states that allow medical or recreational use of marijuana, which now nears 30. “In terms of marijuana and legalization, I think that should be a state issue, state-by-state,” he said during a political rally in October 2015.

Yet whatever hope weed enthusiasts held after Trump’s surprising victory seemed to dissipate when the president-elect’s announced Sessions as his attorney general pick. A staunch conservative from the deep south, Sessions has remained a vocal opponent of marijuana legalization for much of his public life. At times, he almost seems to revel in the role he’s staked out. “Good people don’t smoke marijuana,” said the 70-year-old during a now-infamous Senate hearing last April. “We need grown ups in Washington to say marijuana is not the kind of thing that ought to be legalized, it ought not to be minimized, that it is in fact a very real danger.”

The Republican lawmaker said little to assuage the concerns of the cannabis community during his confirmation hearing for attorney general this month, offering vague answers about his views on marijuana enforcement. “He almost did nothing to reassure the drug policy reform movement or marijuana industry about the future,” said Ethan Nadelmann, director of the Drug Policy Alliance, the nation’s leading drug-law reform group. “He could have said he respects states rights. Or repeated Trump’s comments on the campaign trail of leaving legalization to states. He could have emphasized prosecutorial discretion. He effectively did none of that.”

Though mum about his plans, an Attorney General Sessions would have the power and resources to place legal cannabis firmly in his crosshairs, experts told Vocativ. He could rip up the Cole Memo, which is non-binding, in his first week in office. Sessions will also be in charge of selecting the head of the Justice Department’s criminal division and will have a say in choosing U.S. attorneys, giving him outsize influence over the men and women who will enforce federal drug laws.

According to advocates, years of progress on drug reform policy is likely to be imperiled since Sessions has repeatedly fought such measures pushed by the Obama White House. Blacks and Hispanic men, who already make up a disproportionate number of marijuana arrests in the U.S., stand to see no relief from the new administration, experts say.

Under a Sessions Justice Department, any marijuana grower or dispensary owner operating in the legal recreational cannabis industry could face a potential criminal charge for breaking federal law, Kleiman said. Business raids and arrests are on the table, including the prosecution of anyone who rents or lends money to a marijuana company and even elderly or terminally ill medical patients. The attorney general would also have the power under federal law to seize the assets of marijuana growers and sellers who are legally licensed by states. Should he choose, Sessions could even move to dismantle state pot systems entirely.

“A simple letter or memo clarifying federal law could easily stop marijuana operations,” said Kevin Sabet, the president of Smart Approaches to Marijuana, an anti-legalization advocacy group. “Marijuana use and sales is still against the law — something that we sometimes forget these days.”

Even a slight tack toward cracking down on legal weed by Sessions could be enough to rattle the private equity and venture capital firms that have begun pumping vast sums into the industry, which stands generate $23 billion in sales by 2020. “A couple of high-profile raids would have a chilling effect,” Chris Walsh, the editorial director of Marijuana Business Daily, an industry publication, told Vocativ. “Investors would be the first to pack their bags and go home if things get tough.”

A more aggressive approach by federal law enforcement would not only begin to jeopardize the jobs of an estimated 86,000 people who work in marijuana production, sales, and testing around the U.S. It could also upend businesses, large and small, that indirectly cater to the cannabis industry. One of them is Texas-based Fluence Bioengineering, which develops and manufactures LED lights for indoor growing. Founded by a pair of friends in 2013, the company now employs 50 people in Austin. About half of its sales are to commercial marijuana growers, said Travis Williams, Fluence’s head of marketing.

“If you were to take away that huge market for us, it would definitely stunt growth and our curve of innovation would slow down,” he told Vocativ in an interview.

Still, there are plenty of observers who believe the worst won’t come to pass. Some argue that even with Trump at the top of the Republican party its brand remains too committed to the idea of states rights to unleash federal agents on people obeying local laws. Others claim that the jobs and tax revenue generated by the legal marijuana industry will also keep the White House in check. “At the end of the day, I really can’t envision an action by the federal government that would take away the hundreds of millions of dollars in tax revenue that have already been generated in these last couple of years,” said Sam Chapman, a principal at New Economy Consulting, which advises clients in the cannabis industry.

There is also the simple fact that Americans appear to like weed more than their new president. Roughly 60 percent of adults support the use of legal marijuana, a recent Gallup poll found. Meanwhile, polls show Trump’s favorability rating to now be around 40 percent — the lowest of any incoming president in the last four decades. “At this point legal cannabis is a hell of a lot more popular than Donald Trump,” said Kleiman, the NYU professor.

Nadelmann of the Drug Policy Alliance is less optimistic. “People realize the significance of the threat ahead,” he said . “Some might be banking on the fact that Trump is a businessman. For Sessions, and many of the people who he surrounds himself with, that’s mostly a non-issue.”