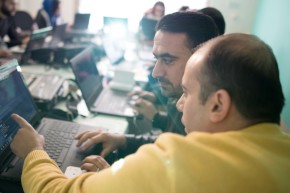 Teaching Displaced Iraqis and Syrian Refugees How To Code

ERBIL, Iraqi Kurdistan – When his computer coding class ends, Shadi Abdullah Khalid’s day is just beginning. The 36-year-old travels straight from the computer lab on the outskirts of Erbil to a warehouse across town where he works the nightshift as a security guard.

For a Syrian refugee living in Iraq, studying to become a computer programmer and supporting a family at once is a tall order. He estimates that he only gets home to the camp where his family lives for just a few hours every week. But Khalid is determined: “I see that these studies could help me get a better job.”

Khalid is one of 30 Syrian refugees and displaced Iraqis training at a computer coding “boot camp” to become IT professionals who will have remote working jobs within a year. The program is run by an American non-profit called Re:Coded that works to address education and development issues for displaced communities.

Teach refugees computer coding, the idea goes, and they can work remotely from anywhere. It’s a potentially scalable program that could improve the lives of thousands across the Middle East. But for students who are already struggling to hold together lives torn apart by war, putting the theory into practice is the real challenge.

The morning class at Re:Coded in Erbil, Iraq

Before he was a refugee, Khalid was a music teacher. He taught primary school students to play musical instruments like the oud and tambour in Qamishli, Syria. But when his wife became sick with leukemia in 2013, he faced a tough choice. Medical care was only available in Damascus or Iraqi Kurdistan.

With the Syrian civil war intensifying, Khalid took his sick wife to Iraq, leaving their young daughter in the care of her family. While his wife received the hospital care she needed, the medical bills mounted and they were soon destitute and living in a tent.

Today there are over 250,000 Syrian refugees like Khalid and his family living in Kurdistan in northern Iraq. Nearly five million Syrians live as refugees across the Middle East and beyond.

More Once A Haven, Sweden Grows Tired Of Refugees

Iraq meanwhile is facing its own crisis. A war against the Islamic State has driven 3.3 million Iraqis from their homes. Over a million displaced Iraqi have fled to the Kurdish north.

For Khalid, finding full time work was a pressing necessity. The job as a security guard brought around US$500 a month but it was never enough. When he heard about a course promising to transform him into a professional software developer, he rushed to apply. “I saw that these studies could help me get a better job,” he said.

Re:Coded was founded last year by Ali Clare, an Australian at New York University’s Center for Global Affairs. The curriculum was originally styled on a coding boot camp course taught at New York’s Flatiron School and is funded by the United Nations Development Programme.

Clare says giving refugees the skills to work remotely could help address the lack of opportunities for displaced Syrians and Iraqis, while simultaneously addressing a global shortage of skilled Arabic-speaking computer programmers. “The Middle East has such massive potential for people to be working in these industries, both as developers and entrepreneurs,” she says. “We really want to build up the skills capacity across the region.”

Initially planned as a full-time course which would see them graduate in eight months, Re:Coded soon realized it would need to adjust for local conditions. The challenges the students faced were not the same as those in U.S.-based coding courses. “The curriculum is a little bit of a challenge even for students in America, but our students are also facing social problems,” says course instructor Shereen Messi. “Some of them are breadwinners for their families, and sometimes they can’t attend the classes.”

Zaineb Amjad is typical of the students. “Before I started I didn’t have a background, therefore at the beginning I choked,” she says. “It was very hard – I didn’t know anything about computers.”

The 30-year-old graduate of English literature from Mosul University is sitting at her laptop in the computer lab, demonstrating how she can now build basic websites and applications. But while she grapples with eye-blurring lines of HTML in class, at home she deals with the challenges of a displaced life.

Currently Iraqi Security Forces are battling Islamic State fighters for control of her hometown and she and her husband have relatives who remain trapped and out of contact inside the city. Her husband Abbas Shihab is also attending the course, and their two young children Mohamed and Jumani must attend daycare so their parents can study. “These days both my kids are sick though,” Amjad says. “I didn’t come for a week for this and this has affected my work.”

While the course pays for their children to attend preschool, her husband Shihab must also still earn a living teaching at a secondary school in the afternoons. “It’s a lot of pressure with family responsibility and kids,” he says. And it only leaves the evening free for completing homework. “Electricity is often out at night and that’s a big problem.”

Re:Coded responded to these challenges by reducing overall course hours and increasing flexibility for students. They are now able to work from home two days a week, with instructors available to help remotely. They’re also working to get some of the students employed immediately. “What we’ve seen is a lot of people really need the employment during the training to reduce attrition,” Clare says.

For this work Re:Coded is partnered with NaTakallam, an online Arabic teaching program, and Magnus Testing, a company that crowdsources software testing. Once students graduate they will be offered work through a variety of partnerships including Microsoft, German company Code Door, Turkish company Kodluyoruz, and global freelancing platforms Guru and Upwork.

Despite the course modifications, 20 of the original students have withdrawn, some because the work was too difficult. One student returned to Fallujah to discover his house had been destroyed by fighting.

Instructor Messi is sympathetic with her students’ troubles. With her dyed red hair, checkered shirt and designer glasses the 29-year-old might look like a Brooklyn hipster, but Messi is a refugee herself. “You could say we all share the same problems,” she says, during a break in the class.

A Syrian computer science graduate from Kobane, she graduated in 2011 but found there were no jobs in her field. She worked in an elementary school in Derrick for two years, but by 2013, with the Syrian civil war getting worse, her situation became dangerous and financially difficult. “There was no internet and no electricity – and I am a software engineer,” she remembers. “I killed my skills in two years. But when I came here I could start again.”

At the end of class, Messi pauses to chat with her students, checking in on how they are doing. Khalid is pensive and worried: balancing all his responsibilities sometimes seems an impossible task. He often thinks about quitting the course, he says, but is taking things one day at a time.

“In the evening I try to do homework but there are many challenges,” he says. When he faces additional expenses he sometimes has to borrow money from friends. “I tell them: ‘Tomorrow, from this course, I will find job and repay you.’”

He walks outside to catch his bus. “And like this I continue,” he says.