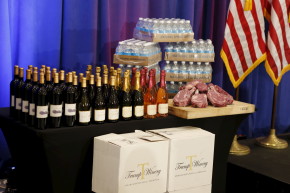 How To Avoid All Things Trump While You’re Online Shopping

Websites, apps, and webpage extensions are being created to help consumers steer-clear of stores and goods related to the Trump family

Steaks and chops described as 'Trump meat' are shown with Trump branded wines and water. — REUTERS
By Ethan Harfenist
Jan 05, 2017 at 2:14 PM ET

President-elect Donald Trump recently announced that he would hold a long-awaited news conference on January 11 to describe how he plans to divorce himself from his business holdings. But for those who deign to support his businesses whether he’s tied to them or not, a number of grassroots initiatives have sprung up to help online shoppers avoid buying the latest Trump neckties, or to keep from booking tee time at one his golf courses.

Trump’s business holdings are vast: they number at least 144 companies and span 25 countries. That’s just his foreign interests, and doesn’t touch on the businesses that deal with Trump or sell his family-branded products. And despite immense public pressure, Trump has still failed to release his tax returns or announce how he plans to separate himself from his business interests.

Given the sheer amount of businesses connected with the Trump family, it’s incredibly hard to navigate which websites and products ultimately contribute to lining their pockets. And that’s where the online tools come in. There’s the Don’t Pay Trump Google Chrome extension, which alerts people browsing the internet which sites carry items tied to Donald and Ivanka Trump. The plugin contains a list of “Trump supporting websites,” and notifies users with an orange overlay on the page and allows them to tweet at the business in question.

“Boycotting businesses affiliated with Trump and affecting their bottom line will cause them to put pressure on his administration or drop his products,” the plugin’s website says. “Reason, peaceful protest, and common human decency seem to have fallen on deaf ears, but money is a language he understands well.”

Then there’s the BoycottTrump app, created by a Democratic super PAC as a way for boycotters to sniff out Trump-related companies. “The election may be over, but the fight against Trump has just begun,” Nate Lerner, the group’s executive director, told NBC News in November. “Our Boycott Trump app enables people to take action against Trump by turning their purchasing power into a tool for protest. This hits Trump and his allies where it hurts them most — their wallets.”

A crowd-sourced spreadsheet called grabyourwallet.org serves as a reference for shoppers to steer-clear of businesses that sell Trump merchandise while offering lists of other business to support that do not have Trump connections. (It’s also the data source for the Don’t Pay Trump Chrome extension). Started in part by brand strategist Shannon Coulter, the #GrabYourWallet hashtag was introduced on October 14 in the aftermath of the “Trump tapes” controversy. Eventually, the hashtag morphed into a full-fledged consumer movement, providing a resource for shoppers who are trying to actively avoid Trump-affiliated products. #GrabYourWallet is averaging about 1,500 mentions per day and has recorded a total reach of about 493 million people, Coulter said. At the time of this article’s publication, the data shows that six companies have pulled Trump-related products from their inventory. Some cite the spreadsheet as the reason for dumping Trump.

“I think that #GrabYourWallet is just a general way of expressing a desire for a more inclusive and respectful society, and developing an understanding of the relationship between our consumer power and our ability to create such a society,” Coulter told Vocativ. “Even in the unlikely event that Trump completely divests and sells off his assets and creates a true blond trust, I think there will be still be a lot of appetite for using GrabYourWallet as a way of keeping the faith in these upcoming years.”

Coulter said that the campaign has placed a lot of emphasis on Ivanka Trump. “She is, without a doubt, a full-blown politician at this stage. I’ve always thought that her involvement with her father’s campaign had as much to do with her own political ambitions as it does his own,” she said. “When we really saw it take off is when she returned to the campaign trail in the wake of the Trump Tapes.”

But Trump-affiliation aside, Coulter says that she’s hoping her campaign turns into a larger platform for consumer awareness, and helps people become more involved in how they shop.

“One thing that this has uncovered is that there is an appetite among consumers for knowing more about the political affiliations that they do business with every day,” she said. “There are some consumer resources out there, but they tend to be pretty narrow in focus. And I include GrabYourWallet in that at the moment…but I think over time it will evolve into something more broad to help consumers understand the political activities and associations of the companies they do business with.”