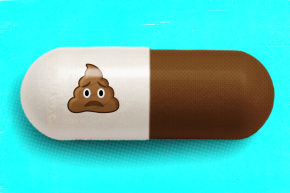 Poop Transplants May Not Be As Miraculous As We Thought

Hard as it might be to believe, human poop has become one of the most exciting things to come along in the medical world in a long while.

In recent years, a growing number of doctors have used fecal transplants — stool samples taken from healthy people and sent straight into someone else’s colon via enema — to permanently treat hardy infections of the gut caused by the bacteria Clostridium difficile with seemingly glowing success. Early trials of the therapy have boasted cure rates of over 90%, an astonishing feat given that these infections often repel the strongest antibiotics available.

But a new study published Tuesday in Clinical Infectious Diseases, while not dispelling the usefulness of fecal transplants, may slow down the hype train a bit.

Canadian researchers studied 28 patients with an active C. diff infection, the latest in a long string of bouts, who were randomized into two groups. Sixteen were given a single fecal transplant, while the rest were given the powerful antibiotic vancomycin, in slowly decreasing doses over a six-week period. To their surprise, they found the transplant group didn’t fare any better than the pill group: 7 out of 16 in the former group had their symptoms clear up, compared to 7 out of 12 who took vancomycin. And even when people who didn’t improve from the antibiotic were given transplants, it still didn’t help them.

So bleh were the initial findings, that the researchers decided to cut their trial early rather than futilely recruit more volunteers.

“In light of our results, I would caution a blanket approach of fecal transplantation to treat recurrent C. diff infection,” said lead author Dr. Susy Hota, medical director of the Infection Prevention and Control Program at Toronto’s University Health Network, in a press statement.

There’s a few things going on here, some good for fecal transplant fans, and some not.

For starters, the trial, while small, is probably one of the most rigorous studies of its kind to date. Much of the scientific hype surrounding fecal transplants has come from less demanding studies and impressive-sounding case reports or anecdotes.

Unlike earlier research, for example, Hota’s team only used patients who were currently suffering from symptoms of C. diff infection, like diarrhea, stomach cramps and fever, instead of people simply with a history of it. Comparison trials have also opted for a different, likely less effective antibiotic strategy, offering patients only two weeks of vancomycin rather than tapering their doses over a longer period of time. These tweaks could have puffed up how impactful transplants actually were.

On the other hand, there’s ample proof, which the researchers admit, that it might take more than one transplant to get the most bang for your buck. And because they gave every volunteer a two-week course of vancomycin before the trial formally started, that might have also weakened the transplant’s potential effectiveness. And while neither group had any severe complications from their treatment, transplant patients did report less side effects in general (somehow, forever knowing you’ve had someone else’s poop inside you wasn’t considered an “adverse effect’).

Of course, even if transplants are only as effective as the best antibiotics we have, they might still be preferable. Many C. diff infections become recurrent at least partly because the normal bacterial environment in our gut, the so-called microbiome, goes off-kilter. Fecal transplants are thought to realign that balance by reseeding the microbiome with someone else’s healthy gut bacteria, which is why they’re also being explored as a potential treatment for other chronic, seemingly incurable disorders like irritable bowel syndrome. Antibiotics, essential as they are, do the opposite by further disturbing the gut microbiome (many cases of C. diff infection are indeed triggered by earlier antibiotic use).

Add to that the ever-present specter of antibiotic resistance and the relative cheapness of fecal transplants, and it’s likely that the therapy will have its place in the medical toolkit someday soon. We just might need to adjust our golden expectations of it.