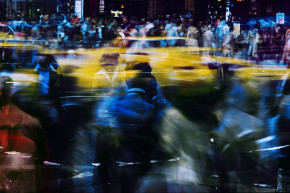 Living right on top of the noise and commotion of a highway isn’t much fun, but its health effects might run far deeper than some extra stress and the occasional sleepless night. A new study suggests those who live within about 150 feet of a major road have an increased risk of developing dementia.

The finding isn’t just some correlation, an underlying social condition that links people who live near major roads and poor brain health. Instead, the study’s authors, from Public Health Ontario, point directly to the pollution — of both the chemical and noise variety — created by traffic as the major driver of increased risk of dementia.

Based on their review of more than 243,000 dementia cases in Ontario between 2001 and 2012, the researchers found that people who lived within 150 feet of a major road had an increased dementia risk of seven to 11 percent. At particular risk were those in urban areas and those who had always lived in the same place. The risk decreased as people lived further away, with those living 150 to 300 feet away being at a four percent increased risk. The effect of major roads seemed to disappear at a distance of 600 feet, the study, published in The Lancet, found.

This increased dementia risk didn’t go away after the researchers accounted for socioeconomic status and other diseases. While a study like this can’t establish that living near a major road is what directly causes the increased dementia risk, it sure looks that way, and other research points to potential mechanisms causing the damage. Constant noise may be a major factor, as it can disrupt sleep and generally impair people’s ability to think.  Dust particles and car exhaust chemicals that are known to get in the bloodstream and cause inflammation, which earlier studies have found can lead to cardiovascular disease and possibly diabetes, could also play a role.

An increased risk of seven to 11 percent may not, the researchers acknowledge, sound like all that much. But that relatively small bump can greatly increase long-term health care costs for those who would otherwise not develop the condition— to say nothing of the toll the disease has on sufferers and their families. And if we can identify traffic on major roads as responsible for even a small percentage of dementia cases, then it becomes possible to change the environment so that the risk is reduced.