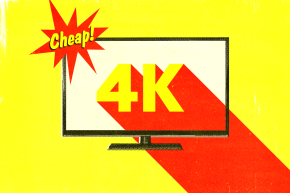 Next time you go shopping for a TV you will notice that 4K is the next “hot tech” being aggressively advertised by manufacturers. That’s because, after years of a slow roll-out of an expensive technology, 4K Ultra-High Definition displays will finally start replacing LCD TVs in the marketplace.

Without getting into too much detail, TVs with 4K displays are basically screens with a resolution of 3840 x 2160 pixels, which enhance the way you watch by creating extremely realistic visuals — far more realistic than standard HDTV. This type of TV has been one of the industry’s fastest growing segments, according to Consumer Technology Association, and whether consumers like it or not, it’s going to be heavily marketed — just like Blue-rays were pushed to replace DVD formats once upon a time.

When 4K TVs first came out several years ago, manufacturers struggled to appeal to the masses because displays cost as much as $8,000. However, this week, as manufacturers show off their newest models at the 2017 Consumer Electronics Show, prices for existing 4K TVs will receive a cut.

Strategy Analytics released an analysis last year revealing that more than 11 million homes in the U.S. — 1 in 8 people — would buy a 4K TV by the end of 2016 since prices have drastically gone down. One Samsung model that debuted price tag of $7,999, now costs about $3,000. That’s one of the most extreme examples, but there were cheaper alternatives such as the Samsung UNHU8550, which went from costing $2,999 to $1,200. There are also other TVs that dip below $1,000.

While price tags are expected to go down, shipments are expected to go up. The CTA projects units to reach 15.6 million in 2017, which will be a 51 percent increase from the 4.2 million units that have been sold since the technology was first introduced three years ago. And as expected, LCD TV sales — which are currently the most sold — will start seeing a decline as 4K starts becoming more popular.

Sales and shipments might be increasing, but the only problem 4K TVs face is that the amount of content is not keeping up with the production increase. Some TV content is still being produced at a lower resolution, which limits the amount of shows and movies you can enjoy in ultra high-definition. Online streaming sites such as Netflix, DirectTV and Amazon have also started to released titled in 4K, but it’s not a number big enough to be convinced to buy a 4K TV.

A number of video game consoles, on the other hand, such as the Xbox One S and the PlayStation 4 Pro, are capable of converting lower-resolution content into 4K, which really makes video games come to life.