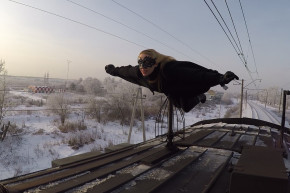 The Kremlin has shut down social media accounts of young Russians who illegally leap onto moving trains, “surfing” them and posting their images and videos online. The accounts of at least 65 groups for “train surfers” were blocked on Vkontakte, Russia’s version of Facebook, last week. In a message posted by Roskomnxdzor, the government watchdog agency on its own official Vkontakte account, the shutdown followed expert advice that the phenomena was a form of “suicidal behavior.”

Vocativ interviewed train-surfers on Vkontakte and found many of them were defiant about the ban. “I don’t plan to stop train surfing,” said Dmitry from St Petersburg. “All these laws and crackdowns just make it more exciting.”

He said the groups have “already found new places to communicate.” Another member told Vocativ that train surfers had already moved on to other platforms like Telegram.

The crackdown on social media also raises the question about the ability of law enforcement to keep young Russians away from being able to jump on trains. Valentin, from Moscow, argued that the ban on social media might lead to more injuries, if aspiring train surfers didn’t get the right advice or safety suggestions. But Dimitry from St Petersburg acknowledged a shutdown on Vkontakte at least might deter some curious wannabes. “Usually newbies prefer to “surf” with partners for their first time. Blocking the groups will make it harder for them to find people, and that might put them off doing it,” he said.

The popularity of train-surfing in Russia has grown significantly. According to the Russian Ministry of Internal Affairs, at least 43 train surfers were killed in 2016. Of that group, at least 19 were minors. The number of arrests during that same period reached 332.