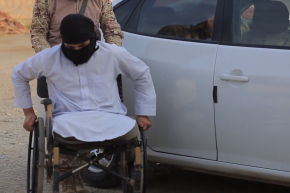 The group claims it carried out 1,112 suicide attacks across Syria and Iraq in 2016

ISIS released a video from fighting in the U.S.-backed military operation in Mosul that features a wheelchair-bound suicide bomber detonating in battle. The video runs at just over 40 minutes, is titled “The Convoy of Light,” and was published on official ISIS channels and circulated on the group’s social media platforms.

The video comes as the battle to take back the Iraqi city from the Islamic State stretches into its fourth month. Security forces overseeing the operation declared the campaign was entering its newest phase this week. The operation began in mid-October and is led by Iraqi forces, Kurdish Peshmerga and Iranian-backed Shiite forces on the ground, alongside U.S. and other international air support. ISIS is fighting more than 100,000 militants that are reportedly taking part in the largest offensive in Iraq since the U.S. invasion of 2003.

The explosive belt and rifle.

The video shows ISIS drone footage of multiple car bomb attacks sent against Iraqi forces in Mosul. One of the suicide attackers is a wheelchair-bound man who goes by the name Abu Laith al-Iraqi. He is shown seated and wearing a belt rigged with explosives, with an M-16 rifle nearby. In the “interview” before he set off on his mission, he called on other Muslims to fight too.

“I didn’t make any excuse, so what’s yours?” he challenges the viewer, before being taken by gunmen to a car wired with explosives. The video shows the moment he purportedly explodes, near a base for what ISIS calls enemy opponents hunkering down in the newly-liberated neighborhood of al-Bakr in eastern Mosul.

ISIS’ Amaq News Agency released figures over the weekend claiming to have carried out 1,112 suicide attacks across Syria and Iraq in 2016. The most targeted area was Mosul’s Nineveh Province, which ISIS claims has been hit with at least 311 attacks against Iraqi security forces, Kurdish peshmerga and Shiite militia.