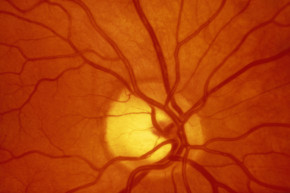 Doctors Can See Into The Human Retina Like Never Before

Diagnosing glaucoma, the second most common cause of blindness in the world, is a bit of a guessing game. Eye doctors seek to find evidence of dying cells on the retina, the layer in the back of the eye covered with light-sensitive cells, but they are often relegated to looking for other signs that aren’t definitive. Often, by the time glaucoma is diagnosed, the disease is so far progressed that there’s no stopping it.

Now researchers from the University of Rochester Medical Center have developed a new technique that can capture images of individual retinal cells, which could help doctors diagnose and treat glaucoma earlier.

Scientists have tried, but it’s nearly impossible to see individual cells called retinal ganglion cells (RGCs) that transmit visual information to the brain for processing. That’s because these cells are tiny and are nearly perfectly transparent. But these cells are important — they are the cells that die off when a person has glaucoma. If doctors could see that individual cells started dying off, they could start patients on treatment early, which could dramatically slow their progression towards blindness.

More X-Ray Vision App Shows You Your Organs And Bones

In the study, published on Monday in the journal PNAS, the researchers modified an existing diagnostic tool called adaptive optics scanning light ophthalmoscopy (AOSLO), adding another lens that allowed them to focus in high resolution on tiny, specific areas of the retina. They used the tool to capture images of individual cells on the retinas of three macaque monkeys, with enough resolution to even see the nuclei inside the cells. The researchers also used the method on 17 humans, some with normal vision and others with impaired vision caused by macular degeneration, in which part of the retina breaks down due to age.

Though the researchers only captured a small number of images, and the resolution of those taken from the humans wasn’t as high due to concerns about the safety of such concentrated light, the researchers were heartened by their findings.

Now that the researchers know that their technique works, they can improve the resolution and safety so that it can be used in humans to diagnose glaucoma, along with other diseases of the retina that can lead to loss of vision, such as macular degeneration, or even colorblindness.