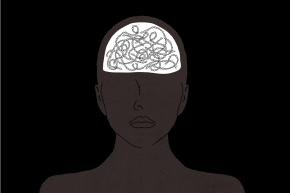 It’s Not You, It’s Your Genes: Study Finds The Root Of Extreme PMS
By Allee Manning

It’s Not You, It’s Your Genes: Study Finds The Root Of Extreme PMS

"This is a big moment for women’s health"

We all know how menstruation has been represented in popular culture (read: far too many bro comedies), characterized by wink-wink-nudge-nudge mentions of “that time of the month” and the depiction of an overly emotional woman. For those who actually suffer from the emotional days that can precede menstruation, it’s a trope that glazes over the disorder’s validity and the frustrations it can cause. Fortunately, new medical research may stands to shed some much-needed light on the issue.

For years, the medical community and the world at large have challenged the validity of women’s experiences. But now those who suffer from the most extreme form of PMS — called premenstrual dysphoric disorder, or PMDD — can finally get some validation of their disabling irritability, sadness and anxiety in the days prior to menstruation.

New findings have, for the first time, identified biological differences between PMDD sufferers — who comprise 2 to 5 percent of reproductive age women — and those who don’t experience it. It comes down to a differences in their genes. The findings, researchers suggest, could put an end the often-sexist discussions surrounding the legitimacy of this condition.

“This is a big moment for women’s health, because it establishes that women with PMDD have an intrinsic difference in their molecular apparatus for response to sex hormones – not just emotional behaviors they should be able to voluntarily control,” said researcher David Goldman in a National Institute of Mental Health press release.

While it was already known that women with PMS were more easily triggered by changes in sex hormones estrogen and progesterone, researchers have remained largely confounded as to the root cause. The study, published in the journal Molecular Psychiatry, looked at the gene sequences in white blood cell lines from women with and without PMDD. It found that a gene complex responsible for regulating biological functions like sex hormones and stressors behaved differently in women with the disorder.

Until this point, PMDD has been termed a “culture-bound syndrome,” listed in the Diagnostic and Statistical Manual of Mental Disorders. That designation has been highly controversial, with psychological experts worrying that the diagnosis could be used against women in courts of law and result in overmedication. While it will likely take time to shake the stigma that has been long associated with the disorder, addressing its biological roots is certainly a start.

Today, PMDD is typically treated with anti-depressants, but the researchers involved seem hopeful that their findings could make way for improved treatment that targets the symptoms at their source.