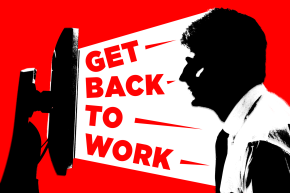 Don't you wish you lived in France?

In what might seem to a U.S. office worker like a dispatch from a mirror universe, France’s workers are getting ready to declare their independence from any sort of job duties while they’re off the clock, particularly when it comes to their emails.

A new law, already in effect as of January 1, is mandating French companies grant their employees a “right to disconnect” from work-related technology outside of office hours. The mandate applies to companies with 50 or more employees, and employers will be granted a grace period to negotiate the details with workers. If an agreement can’t be reached, the Guardian reported, companies will instead create an explicit charter spelling out what rights and obligations workers have when at home.

Though companies might come up with different systems, experts are speculating that common measures will include locking people out of their work emails past office hours or automatically deleting messages sent during the holidays. Others might disable certain functions on company-issued tech. The law wouldn’t necessarily ban any after-hour emails from popping up, since some employees might decide for themselves when they’d like to receive them.

While work emails intruding into our personal lives is increasingly common in many jobs, burnout certainly isn’t new. People in every field, from teachers to health care workers, are dealing with more and more workplace stress, in part because they feel they can’t turn off from work once they leave the office.

Interestingly enough, though, Americans are less likely to say they have trouble maintaining a good work-life balance than people in most other countries, according to a 2015 survey by Ernst & Young. Even so, a full quarter of U.S. workers say the grind has gotten harder since 2009, and nearly half of workers report working more than 50 hours a week, often without extra pay.

Given that a mandate from the Obama administration to grant certain workers more paid overtime was recently, if temporarily, suspended by a federal court injunction in late November, it seems unlikely that the average American’s workload will get any easier to shoulder in the years to come.