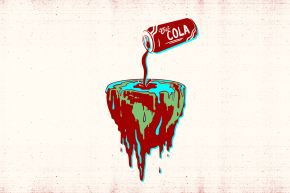 Diet Soda May Be Just As Bad As Regular Soda, Could Be Ruining Planet
By Alasdair Wilkins

Diet Soda May Be Just As Bad As Regular Soda, Could Be Ruining Planet

On January 1, Philadelphia became the biggest city in America to implement a soda tax. The early reaction to the increased soda prices hasn’t exactly been positive, and switching to diet soda offers no relief — the tax, controversially, applies to sugary and artificially sweetened drinks alike.

According to a new policy report from an international team of public health researchers, Philadelphia may have it right: Diet soda really might not be any healthier than regular soda.

Of course, “healthier” is a confusing word. In isolation, if a person stopped drinking regular soda and swapped in diet soda, that calorie reduction ought to make a difference for that person’s weight and, by extension, their health, right?

The trouble, as the team of researchers from the United Kingdom and Brazil point out, is that nobody ever consumes anything in isolation, and so the question becomes how drinking artificially sweetened, low-calorie soda affects other food choices. The paper points to two main possibilities, neither encouraging. The first is that diet soda stimulate people’s sweet taste receptors, creating cravings for other high-calorie treats that negate their calories savings. The other possibility is that our bodies may know diet soda offers no calories, and so our appetites increase until food is found to fill the gap.

While neither effect is definitively proven, they fit with the general finding that diet sodas don’t appear to lead to any weight loss compared with regular soda, which suggests something is canceling out the benefit of a zero-calorie drink.

The real issue with artificial sweeteners is how little we really know about them. Chances are you can find a study to back up whatever opinion you have of diet soda. That’s because, as the authors point out, few areas attract more conflicts of interest than research into artificial sweeteners.

Soda companies have funded countless studies that may or may not all be compromised but do generally demonstrate benefits of artificial sweeteners, whereas the sugar industry has funded studies (that again might not be all bad) but do conveniently find the opposite. And, as an earlier review found, perhaps as many as half of all artificial sweetener researchers with conflicts of interest don’t disclose their potential biases, making it even harder to know what to trust in this field.

At best, maybe, diet sodas are neutral when it comes to people’s weight and overall health. But that still leaves uncertain the more subtle health effects of artificial sweeteners, which are far less well understood than those of sugar.

And even if the effects of sugar alternatives on our bodies remains unclear, it’s far easier to say what impact soda has on the environment. The researchers point out that it takes 300 liters of water to produce a half-liter bottle of soda, plus associated carbon dioxide emissions. Plus, artificial sweeteners appear to have negative effects on aquatic life, making them a particular ecological hazard.

Taken together, it’s hard to argue for diet soda as anything more than the lesser of two evils. And, given the complexities of the obesity epidemic and the uncertain nature of science so shaped by industrial interests, being the lesser of two evils isn’t nothing. But it’s probably best to at least start acknowledging that we should all just be drinking water.