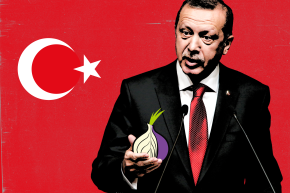 Users can still access the anonymity network, but with some effort

Nearly a month after the government began a new round of major internet crackdowns, human rights monitors say that the anonymity network Tor remains blocked in Turkey.

The ban appears permanent, they say.

The blocks began in early December, when the government of President Recep Tayyip Erdoğan ordered the country’s internet service providers to start censoring access to popular social media sites, as well as to virtual private network services and Tor, which circumvents locally-censored content by routing a user’s connection through a proxy server in another country. But while services like Facebook, YouTube, Twitter, and WhatsApp came back online after 12 hours, Tor and multiple VPNs remain blocked.

Alp Toker, the founder of the Turkey-based internet censorship watchdog service Turkey Blocks, says his group’s measurements and those from commercial ISPs suggest the bans are unlike the temporary social media blackouts and are likely here to stay, a “serious escalation of internet controls in the region,” he told Vocativ.

Turkey Blocks verifies government censorship and throttling using a network of hardware probes designed to measure traffic from inside and outside the country, among other methods.

“There are a couple of likely motivations for the [Tor and VPN] bans being in effect full-time and not just during blackouts,” Toker said. “One is to more effectively restrict access to over 100,000 sites permanently blocked in Turkey, and the other is to ease collection of surveillance data by making it difficult for users to protect private communications.”

Those communications and internet usage data have been utilized by the ruling party to capture and imprison its political rivals, including members of the press, in recent months, Toker said. Following a failed coup attempt in July 2016 and emboldened by recent terror attacks, Erdogan’s administration has taken over newspapers and TV stations and rounded up dozens of journalists in a sweeping retaliatory crackdown against its perceived political opposition. In a report on press freedom updated last September, Reporters Without Borders called Turkey the “world’s biggest prison for journalists.”

Nevertheless, Tor remains available in Turkey — though it now requires some extra effort. Using Tor Bridges, users in the country can connect to the anonymity network by routing through a gateway node that hasn’t been blocked by the government. The Tor website also remains blocked, meaning that those wanting to download the Tor software will need a special link to an uncensored Tor “mirror,” which can be obtained by sending an email to Tor’s maintainers specifying their device’s operating system.