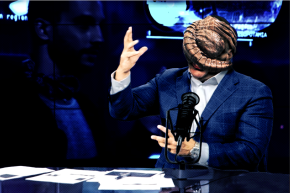 Alex Jones has lost some of his most extreme followers after distancing himself from the Pizzagate investigation, but he seems to be winning some back after a recent rant claiming that the upcoming film “Alien: Covenant” explains the dogma and secret mission of a global elite that is trying to enslave the human race.

Throughout the course of the presidential election, Jones — a conspiracy theory-touting radio host and owner of the Infowar digital media organization — went from being a paranoiac voice screaming from the fringes to an actual political influencer. He owes much of his rise to Donald Trump, who appeared on The Alex Jones Show in December, and told Jones, “Your reputation is amazing. I will not let you down.” Jones can also thank Hillary Clinton and Barack Obama, who mentioned the host during campaign speeches.

All of Jones’ reporting and punditry is inspired by his guiding theory that the “globalists,” operating through the Illuminati secret society, are trying to build a “New World Order” in which their super race rules over all mere humans. According to Jones, most American tragedies, including the September 11 attacks and the Sandy Hook Elementary School shooting, were actually orchestrated by the U.S. government in order to manipulate us and justify the depletion of our freedoms.

But recently, Jones has spent less attention on starting witch hunts and warning about the New World Order, and instead has focused on mocking loser leftists and trying to de-legitimize mainstream media by branding it the real “fake news.” During a recent broadcast from his home, Jones even tried to extinguish the Pizzagate grease fire, saying “You can’t then have people go through these things just randomly and say, ‘Oh this pizza place must be the center of it all just because in some pedophilia codewords they use ‘pizza.’ That’s a super common word, OK?”

But his delusions came back in full-force on December 30, with a video titled “The Real Secrets of Alien Covenant Leaked.” In the 14-minute rant, Jones explained “the globalist, the social engineers that run this planet” don’t believe in the scientific theory of evolution, but instead believe in direct panspermia —a theory that organisms were planted on Earth by an extraterrestrial race.

Furthermore, Jones said, the Illuminati are inspired by this godlike race of aliens and are trying to take control of human evolution. He claims the globalists “are following in the footsteps of these humanoid gods and are turning the entire planet into a petri dish where they are testing on the population… to create these new super creations.”

Based on his viewing of the trailer for “Alien: Covenant,” which premiered on Christmas Eve, Jones believes that director Ridley Scott is revealing the globalists’ strategy. He provides no explanation as to why he thinks this other than the fact that the premise of the film and the whole Alien franchise seem to line up with what he thinks the Illuminati believe. “When the first Alien film came out it was something completely new,” Jones said. “Ridley Scott admitted that basically the ship was a weapon carrying bio-mechanical creatures that were used for war by advanced species…. This is what the globalists are now admittedly currently building. The entire Alien franchise is a revelation of the method.”

“Alien: Covenant,” which is the second film in the Alien prequel series, following 2012’s “Prometheus,” shows humans exploring a seemingly paradisiacal planet. But it’s not what it seems. As Jones explains, it’s actually “a giant test tube merging plants and animals in bizarre new forms — a religious experiment of the advanced Anunnaki race.” (Anunnakis are not a part of Alien franchise lore, but conspiracy theorists and the metaphysically inclined believe that a group of Mesopotamian deities known as the Anunnaki were actually aliens who live on Nibiru, or Planet X, and engineered the human race.)

Jones claimed that, much like how the superior alien race of “Alien: Covenant” is creating new organisms through bio-engineering, the globalists are modifying organisms here on earth through GMOs. “We are being sacrificed in this huge experiment,” he said. “There are thousands of studies in the last 20 years admitting that GMO crops and GMO vaccines in other systems are purposefully changing our DNA and mutating us.”

The video seems to be winning over some of the fans Jones has been losing in recent weeks. As one commenter posted: “Oh, you are so skating on thin ice, but I thank you for doing your best to tell the truth.”