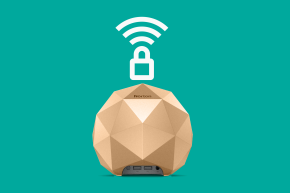 Wi-Fi Routers Will Guard Your Internet-Connected Home From Hackers

The Norton Core is a new home router that looks something like a disco ball, but it’s a product with serious aims.

Symantec, known for its Norton anti-virus software, developed the router to go beyond protecting your computer to strengthen the security of your entire internet-connected home network.

It’s supposed to automatically update all firmware, detect any vulnerabilities in internet-connected home appliances and even put them in quarantine. Therefore, if a hacker were to access and infect one of your devices, the router’s encryption and secure private network would stop the malware from spreading to your other devices.

Internet of things devices that can be protected include thermostats, house lights, door locks, children’s dolls, printers and other smart home appliances. Other unique features that routers like the Norton Core have are parent controls and remote app control, which tells you when attacks are blocked.

Symantec, which introduced its $280 router at the Consumer Electronics Show on Tuesday, is not the first to try and protect entire homes with its hardware, but its definitely one of the first to jump on the trend this year.

CUJO, Luma and F-Secure are other companies that are expected to also release similar routers meant to not only amplify Wi-Fi signal, but protect the entire network. With more and more items being connected to the internet these days — some that make no sense at all — it is important for companies to upgrade their products and provide more security, but in the meantime a router that does the job for them could help.