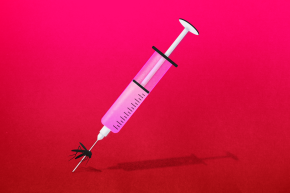 More than one million people die of malaria every year, most of them children, despite prevention techniques like mosquito netting and treatments like antimalarials. Public health experts agree that the world needs a vaccine before the disease can be eradicated, but developing one has proved challenging.

Now, researchers from the Center for Infectious Disease Research (CIDR) in Seattle have just completed the first clinical trial for a new vaccine possibility. The results are promising, though there is still a long process before the vaccine could become widely available.

Malaria is caused by a parasite that is transmitted in the saliva of the Anopheles mosquito. Once inside the human body, infectious forms of the parasite develop in the liver, then spread throughout the host’s red blood cells, destroying them and causing symptoms like fever, chills, nausea, and eventually seizures, coma, and death. But with a functional vaccine, a person’s immune system would recognize the parasite before it reproduces and causes damage.

To make their vaccine, CIDR researchers created a genetically engineered form of malaria parasite that can’t grow in the liver or cause illness, but still trains the immune system to recognize and attack it. In the study, published Wednesday in the journal Science Translational Medicine, the researchers infected mosquitoes with their engineered parasite, called GAP3KO, then had the mosquitoes bite 30 mice.

Next, they tried it in 10 human volunteers, who each received 150-200 mosquito bites. For the 28 days after the infection, none of the volunteers showed any symptoms of malaria and tested negative for the disease (there were a few bad reactions, but that was mostly because the participants received so many mosquito bites). Their immune systems developed antibodies that would combat the parasite should they become infected with the real one.

There are other malaria vaccines being developed, most notably one called RTS,S that has already gone through clinical trials and began a pilot testing program last year. The results of this first clinical trial indicate that GAP3KO might be more effective with fewer doses, though it only was tested in 10 people.

But more studies are needed to answer remaining questions about the vaccine before it can be administered to the public. The researchers still need to figure out what dose of modified parasite is sufficient to create antibodies in patients, whether it’s safe to use in children and how long the immunity lasts.

Still, this study is “a major advance in malaria vaccine development,” said Robert Seder, the Chief of Cellular Immunology at the Vaccine Research Center at the National Institutes of Health, in a press release.