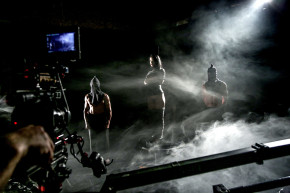 Katrina Jade, a 25-year-old with a tattoo of a spider web creeping across her temple, is bound shoulder-to-ankle in black rope. She is tied to a platform perched above a dark pool of water, while fog drifts around her feet. Shirtless men wearing black hoods stand to either side. Behind her, a large swath of black fabric completes the illusion that she is in a spooky netherworld, instead of shooting an adult film in a warehouse in the San Fernando Valley.

Despite the ominous setting, the director, Kayden Kross, is intent on showing that Jade is a willing participant — and, really, the one in control. Sex is so often talked about, particularly by anti-sex work activists, as if it exists in its own category, such that it’s incomparable to anything else that one might do for money. But, as Kross sees it, it’s just a job — a job that happens to come with the unique challenge of ensuring sexual consent.

“When she looks at you, start pulling,” says Kross to the hooded men, who are holding ends of the rope wrapped around Jade’s body. They do as told and a mechanism is activated to make the platform slowly rotate, so that it looks like they are forcefully unwrapping her body. Kross — who started in the industry a decade ago as a performer but now only works on-screen with her partner, fellow porn star Manuel Ferrara — runs through it several times, emphasizing that they have to wait until Jade looks at them to begin pulling the rope. It has to seem like she is asking them to unravel her.

The topic of consent is an unavoidable one in the industry now. It also came up several times during the more than fours hours on-set spent waiting to begin shooting — amid makeup, stretching, casual nudity, and talk of laxatives. The consent violation allegations have been a wakeup call for parts of the industry desperately in need of one, according to Kross, who carries an air of relaxed, unthreatened confidence on set. “The James Deen thing put performers on notice,” she said, curled up on a couch before filming began. “But I think the Nikki Benz thing is going to put producers on notice, because the liability shifted.”

It’s typical in the industry for directors to establish which particular acts a performer is OK with beforehand from talking with their agent or viewing their profile on their agent’s website. In the latter case, a performer’s profile typically features several photos, their measurements and a list of the acts on offer — for example, bondage, blow jobs, creampies. “Each thing that you might do on the ‘menu’ falls on a spectrum of extremity,” Kross explained.

But in the case of this shoot, Kross has unique concerns. That’s because Jade’s husband, Nigel, who enjoys seeing her with other men, is also on set. Jade is performing with two popular, longtime male performers, Tommy Gunn and Charles Dera, as her husband looks on. “Usually, if something happens on set even, if it’s just that it’s too cold or if someone doesn’t like something, it doesn’t reverberate throughout their personal lives when they get home,” said Kross, who was prepared for a long day in a loose grey sweatshirt and black leggings, her blonde hair pulled back tight in a ponytail. That isn’t necessarily the case when a real-life couple is involved. Kross not only had to make sure that both male stars were comfortable performing in front of their scene partner’s husband, but also that both Jade and Nigel were independently OK with everything that would be happening on-screen.

“When you start hitting on emotionally uncomfortable things, I think it’s only fair to give them warning,” she said. “In my mind, to get something really good you’re going to get something that hits the emotional aspect of an interaction, otherwise it’s just mechanical.”

Jade seemed less concerned. “I’m pretty much good with everything,” she said, while having her makeup done. Similarly, Dera and Gunn, who are earnest and effusive about their love for their job, said they were unphased by the prospect of having sex with a woman in front of her real-life husband. But Kross made sure to meet in person with the couple to talk over every detail. She also talked with the male performers by phone. That is an unusual amount of pre-production planning — it’s not uncommon for adult performers to show up on set and have the details of the scenario sketched out just before filming.

Once filming started, Kross periodically checked in to make sure the performers were comfortable — Was the rope pinching Jade? Were Dera and Gunn’s feet too cold from standing in the water? She also established that performers could bring the action to a halt simply by looking at her and making eye contact. That way, someone could stop the scene without calling attention to themselves. It was meant to take the pressure off the performers, so they don’t feel like they have to pretend to be okay with something just for the sake of not upsetting their coworkers.

While this high degree of focus on consent is a reality on some sets, there are other corners of the industry where it is nowhere near as big of a concern. Kross, who started her career with a sought-after Vivid contract, tells the story of one of her first shoots, when a director informed her on-set that she would be doing anal, an act she had never performed before on camera. “I asked in front of the entire crew if I had to, and the director still said yes,” she said. “I did it. It was painful, I was not ready for it.” She added, “That director should have pulled the plug on that the moment I asked if I had to.”

The recent allegations could be seen as shining an unwelcome spotlight on male talent, but Dera and Gunn said they don’t feel unfairly implicated by the news. “In terms of just my reputation in the business, and I’m not patting on myself on the back, but I’m one of the nicest guys in the business,” said Gunn, a friendly and theatrical man with an intense and oddly endearing passion for fixing up his deluxe military vehicle, Big Momma. “So, does it make me concerned? Not entirely.” Dera, a black-haired, square-jawed former Chippendales dancer and ex-Marine, who now does mixed martial arts, said he prefers to keep his head down and focus on his own work. “I don’t watch news or listen to media,” he said. “I have nothing to do with anything but my own life.”

But he does pay attention to the overall direction of the industry. The topic came up of the popular series, “Bang Bus,” which describes itself as a series where women are “picked right off the street, banged on the road and then tossed back out to the curb!” Dera speculated, seemingly mystified, that there were a lot of men out there who got off on seeing women humiliated.

Both Deen and Tony T were known for their “rough” performances and they built careers at a time when, as Dera put it, what’s popular is content that is “dominating and demeaning to women, beating them up.” Kross questions whether this kind of content is currently on the rise — she says it comes and goes as a trend — although she does believe that it introduces unique challenges when it comes to consent. “So imagine you’ve got this guy whose job it is to make it look like he’s making a rag doll out of his partner, then throw in the fact that this sexually arouses him, and you create a very charged environment where tunnel vision can take over,” she said. “You can misread cues from your partner. Or you can read the cues just fine and not heed them.”

This is the climate in which Kross is attempting to create porn with an advanced understanding of consent. It’s not always easy, as became clear at the end of the shoot. Kross had briefed all of the performers ahead of time on the particular challenges of the shoot, but, as she put it later in an email, consent “is often relative in the moment.” She explained, “Once we were into it — towards the end — [Jade had] been on set for eight hours, the water was cold, the set was impractical … and she’d probably had enough stop-and-go sex for the day,” said Kross, although she noted that the performer wasn’t complaining and was being a “trooper.” “We only needed a small bit more to finish, but we did need it. I could tell she was tired and wanted to be done.” That, she said, is “where the question of consent really starts to become a thing.”

If Jade had announced that she couldn’t shoot anymore, Kross says that, of course, she would have stopped filming — but there’s a grey area where performers are not calling it quits but would clearly prefer to not be doing what they’re doing anymore. “The consent then isn’t necessarily sexual by nature,” said Kross in explaining how she thinks about these situations. “From where I stand, that’s more of a hazard of working. You will get tired, and will likely still be expected to do the job according to the agreement that has been made with the person paying you.” She compares it to someone in an office job who by the end of the day is “too pecked at by emails or memos or busywork to attack anything in good humor.”

Despite all the unique sensitivities and vulnerabilities of the job, at the end of the day — particularly at the end of the day — it’s also just a job. “There is the point in the day where every performer is waiting to go home,” she said, “but then the question is why they keep going, and how they feel about what happened when they leave.”