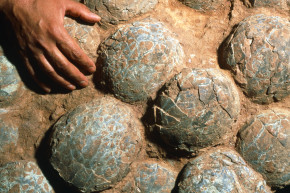 Dinosaurs May Have Gone Extinct Because Having Babies Took Too Long

Eggs took up to a half-year to hatch, leaving dinosaurs vulnerable when they could least afford it

The dinosaurs went extinct 66 million years ago, and the question of just what killed off the dinosaurs, be it a giant asteroid or even climate change, has long dominated the popular imagination. But there’s another crucial question: Why did the dinosaurs die out when so many other species — including their closest relatives, birds — survived? According to new research, a key part of the answer might be how long it took for dinosaurs’ eggs to hatch.

Technically speaking, ancient birds weren’t relatives of dinosaurs — they were dinosaurs. As such, researchers have looked to modern birds to understand aspects of dinosaur biology that are difficult to see in the fossil record. Since birds tend to lay large eggs that hatch quickly — chickens take three weeks, and even a giant like the ostrich only needs six weeks – paleontologists had figured ancient dinosaurs did similarly. But researchers at Florida State University have found that dinosaurs might after all, at least in this one instance, really be more like reptiles, which lay lots of small eggs that take a while to hatch.

The researchers examined the teeth of embryonic dinosaur fossils. Like tree rings, lines form on teeth that indicate how much time has elapsed, and they found the incubation time for these dinosaurs was much longer than expected, likely about three to six months. It’s possible then that the ancestors of modern birds had already evolved a quicker hatching period before the dinosaur extinction period, which would have given them a major advantage.

Why does the ability to have babies quickly matter so much? It’s all an issue of resources. Dinosaurs would have had to commit up to a full half-year to guarding their eggs from predators and securing enough food to ward off starvation. For dinosaur species to survive, they would need three to six months of relative calm and heavy resource investment to hatch the next generation — a hard thing if an asteroid disrupted the world as they knew it.

This isn’t the final word on why the dinosaurs went extinct, and other factors, like their sheer size and higher calorie needs, likely came into play. But the fact that they took so long to have babies — to say nothing of the fact dinosaurs likely also took a long time sexual maturity — would have created another major challenge.

To survive a mass extinction, species needed to be able to respond quickly to changing environmental niches. The dinosaur way of doing things worked brilliantly for hundreds of millions of years, but once it stopped working, it really stopped.