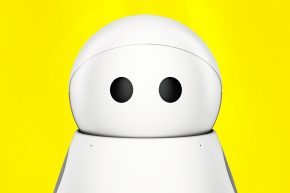 This Cute Robot Plays With Your Kids And Monitors Your Home

The Kuri is adorable, useful and also just a little bit creepy

If Wall-E and EVE would’ve had a baby in the 2008 Pixar movie, it would’ve definitely looked like Mayfield Robotics’ new robot Kuri — which makes sense since it was designed by a longtime Pixar animator.

Kuri, which was unveiled at the 2017 Consumer Electronics Show, is essentially the cute, friendlier version of an Amazon Echo or Google Home. The little robot — which also resembles Star Wars’ R2-D2 — can program reminders, play music and podcasts and even read your children bedtime stories. It can also monitor your home and send you notifications by using the HD camera behind its eyes, which can capture photos and videos or live-stream if it’s synced with your phone.

You can use your phone remotely to tell it to go to the couch and check up on your dog. Then you can live-stream it’s view and speak into the robot to yell at your dog if it’s misbehaving — same for the children, really. But that’s where the idea of a remotely operated robot spy gets creepy.

Although the idea of an extremely smart robot seems cool, it could possibly pose a risk to a child’s privacy — the whole family’s even. Kuri is filled with mapping sensors that help it remember where everything is located and avoid getting too close to cliffs and other damaging obstacles. Over time, it’ll learn which room belongs to whom and at what time you come back home from work so it can greet you. Kuri also has four microphones that help it locate sound and go investigate its source.

The robot, although very smart, can’t speak English. It communicates in “robot” language —“bebeep” means “hello,” “beep” means “yes” and “bloop” means “no” — and projects emotions with its eyes and beeping noises. If you pat it on the head, it’ll look up to you and joyfully chirp.

It’s unclear if the adorable robot can be hacked or exploited, but most likely it can since everything nowadays can be hacked. Mayfield states in its privacy policy that the only data collected from consumer is the information they input onto the website — although that can be shared with third-parties for advertising purposes.

The company also makes sure to mention in its policy that children’s (anyone under the age of 13) information is not stored or tracked. In the event that it was inadvertently collected, then Mayfield’s will immediately delete it.

The $699 Kuri will not ship until the 2017 holiday season, but in the meantime, Mayfield’s is not the only company working on a smart voice assistant for families, but more specifically children. Mattel also announced Aristotle, which is being called the “Alexa for Kids,” at the Consumer Electronics Show. The device will work as a baby monitor and a tutor, and will be encrypted.

Aristotle will be released in June for $300, several months prior to the release of the Kuri — we’ll have to wait and see how parents embrace both innovations.