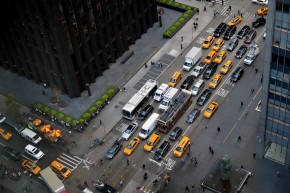 MIT Study Says Uber And Lyft Could Beat Out Taxis

A new study from MIT study claims that ride-sharing apps like Uber and Lyft could be more efficient than taxis and drastically reduce New York City’s traffic woes … as long as riders are okay with sharing cars with strangers and their rides taking a few minutes longer.

Researchers at MIT’s Computer Science and Artificial Intelligence Laboratory used data from 3 million taxi rides in NYC to construct an algorithm that they say will send cars to multiple pick-ups as the ride requests come in, picking up and dropping off as many people as possible along the most efficient routes. The study claims that 98 percent of the demand for taxis would be satisfied by just 3,000 four-passenger cars, with an average wait time of 2.7 minutes. As of 2014, there were nearly 13,500 yellow cabs in the city. The study, CNET points out, was not funded by Uber or Lyft.

This could, conceivably, mean fewer cars on the road and therefore less traffic and pollution. But it’s also dependent on riders being willing to wait longer for a car and then share the ride with a stranger—two things that many people take cabs to avoid. The study does point out that Uber and Lyft have made carpooling more palatable to the mainstream as those services’ carpool options tend to be cheaper than solo rides (though, as this article points out, passengers and especially drivers seem to prefer the non-pool versions). It also points out that those platforms’ carpool options as they currently exist don’t adjust for new pick-ups and drop-offs in real-time like the algorithm does.

The algorithm also relies on the drivers themselves being willing to drive along the most efficient routes for the passengers rather than the ones that might make them the most money in the shortest amount of time, but that may not be that much of a problem for long: Professor Daniela Rus, who led the study, said the program was “particularly suited to autonomous cars, since it can continuously reroute vehicles based on real-time requests.”