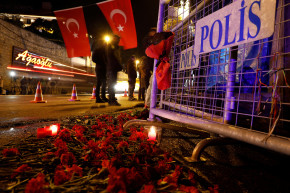 In an official statement circulated on social media ISIS announced that a “soldier of the group” carried out the deadly New Year’s Eve terror attack that killed at least 39 at an Istanbul nightclub late Saturday.

“The apostate Turkish government should know that the blood of Muslims spilled by its warplanes and cannons will ignite fire inside its house,” the ISIS post said, threatening further attacks on Turkey in retribution for its support of military campaigns against ISIS in Syria and Iraq.

According to the Turkish Hurriyet daily, the armed assailant opened fire on the packed New Year’s Eve party at the Reina nightclub, located in a posh waterfront neighborhood home to Muslim, Jewish and Christian Turks. He first shot dead a guard outside the club, then continued inside, shooting indiscriminately. Fearing for their lives, a number of people leapt into the Bosphorous River.

Among the 39 casualties were 25 foreign nationals hailing from Israel, Russia, France, Tunisia, Lebanon, India, Belgium, Jordan and Saudi Arabia, according to local media. At least 65 people were also wounded in the attack.

The official statement posted by ISIS

The post said the assailant, who fled the scene and still remains at large, carried out the attack with the use of a rifle and hand grenades and “in response to calls” to target Turkey issued by the organization’s leader Abu Bakr al-Baghdadi.

On social media, including the platform Telegram which has become popular with ISIS supporters, messages celebrated “the blessed attacks carried out by heroes,” saying that it “carries a clear ISIS fingerprint.”

One user rejoiced that “the blood of the Crusaders is flowing in the streets of Istanbul,” calling on the group to continue to hurt the Turkish economy “in retaliation for the Sunni people in Iraq and Syria, [and kill] Crusader gays and prostitutes in Istanbul, the city of fornication and corruption.”

“They are working to destroy our country’s morale and create chaos by deliberately targeting our nation’s peace and targeting civilians with these heinous attacks,” President Recep Tayyip Erdogan said in a statement Sunday. “We will retain our cool-headedness as a nation, standing more closely together, and we will never give ground to such dirty games.”

Saturday’s attack marked the end of a bloody year of terror in Turkey, where at least 275 people were killed in attacks carried out by ISIS, Kurdish opposition militants, and others. Ankara backs the Syrian rebel military campaign in northern Syria that aims to push ISIS from al-Bab, north of Aleppo, one of ISIS’ last remaining holdouts in the country.

“When you follow the news from Istanbul remember that the blood of Muslims in al-Bab isn’t water,” read a pro-ISIS channel on Telegram allegedly showing a Syrian boy suffering from burns. “Turkey waged a war against the Mujahideen to help the Crusaders and it became a legitimate target for the believers, as well as gathering places for Christians.”