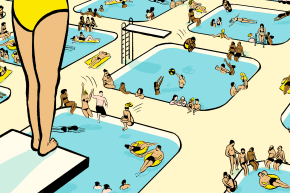 Struck out swiping on the "traditional" dating apps? Maybe it's time to try something more niche

With people resolving to put themselves out there more and find someone to snuggle up with before the coldest part of winter sets in, it’s only natural that the week following New Year’s is widely known as prime time for online dating. The busiest day of the year is expected to be Jan. 8 (exactly one week after New Year’s Day) having been termed “Dating Sunday” by Match.com, which also owns OkCupid and Tinder.

While the big names in the dating app world — like Tinder, PlentyOfFish, OkCupid, Zoosk — have enjoyed a comfortable reign, the increased popularity of newer location-specific, female-centric, and less appearance-based apps in 2015 set the stage for a far more diverse 2016. The spread of niche dating apps has continued and accommodates the growing, diverse population of dating app users. This shift within the larger dating app landscape coincides with unprecedented change to the most widely used dating apps, you know and maybe didn’t love so much to begin with. Within the past year, the most well-known apps on the market have made some serious revamps to their platform.

Julie Spira, an online dating expert who has been coaching people in finding the right match for about 20 years, says that this is in large part due to the fatigue many are beginning to feel when hours of swiping result in very little real-life action. “Many people [just] use these apps for entertainment, swiping on their lunch break,” she said. “But more and more people who first started using dating apps years ago are looking for more real matches.”

So the biggest names in online dating have begun adding features, updating their platforms, and introducing new means of getting people excited and more likely to find what they’re actually looking for, rather than just a way to pass the time.

Meanwhile, new dating apps seem to spring up every day. So as an addition or alternative to retrieving that app deleted off one’s phone from the cloud and rekindling an old profile, Spira also notes that now might be a good time for people to explore the niche dating apps they may not have heard of but have been built specifically to suit them (whether they’re a bacon-lover, gym rat, or person of color sick of rampant racism in online dating). Especially considering how many of these more specific offerings seem to be inspiring the mainstream apps to make these changes in the first place.

While it’s tough to say for sure what the “number one” dating app really is — multiple platforms claim this distinction — given that dating apps fall under various categories within app stores, making direct comparisons impossible, it’s fair to assume Tinder is one of the most ubiquitous (at least one million people actually pay for the premium version of the free service).

In addition to various promotions, like its election-related “Swipe the Vote” campaign, the app has made some pretty big changes over the past year. One major feature was the inclusion of more gender options to the platform, with its press release acknowledging, “We haven’t been perfect in the past. If you believe you were ever wrongfully removed from Tinder because another user reported you unfairly due to your gender, we want to invite you back to our platform.”

While Tinder didn’t specify impetus to make these changes to its policy and platform, it’s important to note that a wide variety of LGBTQ-focused dating apps have sprung up over the course of the past couple years as Tinder’s bad rap for inclusivity became more publicized.

OKCupid, another one of the most well-known dating apps, also added more gender options to its offerings in 2016, and recently expanded its matches to include those looking for polyamorous relationships. It’s at least plausible that this change was made following the hype surrounding “Feeld,” originally called “3nder,” the first major dating app for those looking to engage in relationships or sexual encounters that come in threes.

“Sarah,” a 31-year-old woman who has been single for three-and-a-half years and requested Vocativ use a pseudonym to refer to her, is active on both Tinder and Bumble, but says she prefers Feeld in finding her ideal dating partners: men in open relationships. Feeld, she says, is better for finding this given the type of sexually and romantically open-minded match. “Because the app is specifically geared towards people with specific wants, desires, lifestyles, they’re very upfront about it,” she said. “There’s nothing lost in translation, there’s no…question, because all that is pretty much incorporated into the profiles that you make.”

She recently met a man who lives with his girlfriend on Feeld, whose profile featured numerous photos of them together. The two have been casually dating for a few weeks. “He kind of blew my mind with how open and communicative he was about what he was looking for and what he wanted,” she said. “It was so refreshing to hear from somebody who (like a lot of women) is never really sure what’s going on with a lot of the guys that she’s seeing.”

Like Sarah, Michael Oria, a 30-year-old Brooklyn resident who works in information technology, says he is also finding better luck for his particular interest group outside the mainstream dating app world. He enjoys using Sapio, a new app that is marketed towards Sapiosexuals — a neologism meaning a person who is sexually attracted to intelligence or the human mind before appearance — as “a dating app with depth.” While Oria does not identify as sapiosexual, he says he appreciates the app’s focus on personality and true connection over looks as someone looking for a real connection. “I think it’s more personality-based, and a way of seeing if someone is clever, more so than Tinder,” he said.

He also appreciates that other major dating apps he’s used do not use the kind of gaming mentality Sapio provides. In order to see the answers to personal questions users one is interested in has provided, that user must spend “coins,” which they receive from answering these questions themselves. “They make it fun,” he said. “You gotta earn those coins.”

It’s the same game-based interest that another dating app also created last year hopes to capitalize: Greenlight, one of the many apps that use geo-location technology, has been described as “Pokémon Go” meets dating. Using realtime features that show where nearby single members are (yellow and red light indicators indicate some degree of pre-existing romantic involvement), the app is meant to help people identify the hot spots for the uninvolved and plan out their travels like some kind of thirst-driven scavenger hunt.

While Oria has yet to meet that special someone on Sapio, the disarming and less hookup-motivated aspects of it keep him swiping. It’s the same kind of appeal that got Matt, 29, and Bridget, 27, a couple now expecting their first child together, to first connect on Happn, another geolocation-based app that links people who come within close proximity of each other. Both say that they began using Happn in 2014 “for fun” — in fact, it was the first dating app that Matt had ever used, and he only did so after his coworker told him how her relative used it to find out she passed a well-known actor she was a fan of while on the street. “I felt like dating apps seemed a little desperate or the things that [others on the app] were looking for wasn’t exactly what I was looking for,” he said.

Both were intrigued by the idea of seeing the people they hurriedly passed in New York, where strangers are notoriously cold to one another IRL. So while Bridget hung out at a Brooklyn beer garden as Matt sat in his home about a block away and decided to “charm” (the mechanism used to indicate interest) him, the two unknowingly began a serious courtship they intend to last the rest of their lives. “That’s as close to organic meeting you’re going to get in a digital world,” Spira said, laughing.