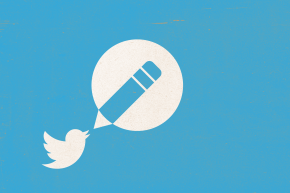 Twitter Is Considering That Long-Awaited Edit Function
By Alejandro Alba

We can all agree that 2016 was a terrible year for Twitter for numerous reasons, but 2017 might be its comeback with the potential to change lists, improve how it deals with harassment and finally implement an edit button.

Twitter’s CEO Jack Dorsey went online Thursday afternoon to ask users “what’s the most important thing you want to see Twitter improve or create in 2017?” While many took the opportunity to troll Dorsey, others actually provided helpful input.

Following in the footsteps of Brian Chesky: what's the most important thing you want to see Twitter improve or create in 2017? #Twitter2017

One of the most requested “improvements” was an edit button, which has been an idea tossed around ever since the social network was created in 2006. However, users have been more persistent about the edit tool in recent years since Twitter implemented various inept changes such as changing the “Favorite” star icon into a “Like” heart icon.

While being able to edits tweets is great for fixing typos, broken links or incorrect punctuation, giving such power to high-profiled celebrities and politicians — especially President-elect Donald Trump — could just promote bad behavior.

It would be better to implement a quick fix tool that allows users to fix typos within a 30-second window after tapping “Tweet.” Dorsey hinted that the company is considering the idea of an edit button, but he wanted users to specify what type of editing tool they really want.

Another suggestion for the edit button was implementing some sort of flag that indicates when a tweet was edited and potentially show all previous unedited versions.

Aside from an edit button, many users were also requesting more visibility into how harassment reports are handled. Twitter is infamous for its poor dealing with online trolls other other types of harassers. Over the past couple years, the company has attempted to improve its anti-harassment tools, but it’s failed to protect its users such as comedian Leslie Jones.

Other suggestions from users included better list organizing, a bookmark button and better third-party support for platforms such as Tweetdeck.

It’s still unclear how soon users can expect any changes, if any, but Dorsey was very open to everyone’s ideas and would mostly reply with “great point” or “we’ve been thinking about.” The CEO promised to write up a roundup and follow up on Friday.