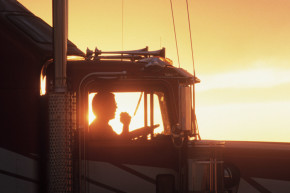 Depression has long been an unspoken affliction among America's truck drivers. Michael Suson wants to end that

The suicides shook Michael Suson to his core.

The first occurred last June when a fellow co-worker with Steelman Transportation, a flatbed carrier based in Springfield, Missouri, used a gun to shoot himself at the company yard. Twelve days later, Suson lost a close friend, another long-haul driver, who hanged himself at home.

For Suson, a tattooed and soft-spoken Oklahoman, the three men shared more than just a profession — years before Suson had also come close to taking his own life.

“The inside of that truck is smaller than a jail cell,” said the 45-year-old, who has battled with depression, off-and-on, during his 23 years as a long-haul driver — a condition many truckers, in private, say they struggle with. “The walls get closer to you the more time you spend in there.”

Stricken by loss, and aware of an unspoken affliction among his peers, Suson grew determined to do something. Six months ago, he launched Truckers for Truckers on Facebook, a closed group aimed to support drivers dealing with depression and suicidal thoughts. It’s since become a lifeline for those who’ve lost hope behind the wheel.

The long-haul trucking industry is a source of employment for the 800,000 who operate big rigs on America’s highways — but not an easy one. As factories shutter and working class wages decline, it remains one of the few blue collar jobs that, at least for now, continues to grow. There is the allure of life on the open road, and the pride that comes with literally driving much of the nation’s economy.

Yet the road can take its toll. Research shows rates of depression among truck drivers to be far higher than the national average. Health problems and loneliness plague those whose diets center around rest stops and who live out of their vehicles for weeks at a time. Relationships suffer or cease to exist. And the pay and benefits are nowhere near what they used to be, a fact that scholars ascribe to the industry’s steady deregulation over the last four decades. One economist, writing in 2006, described long-haul trucks as “sweatshops on wheels.”

“All of it can be a pretty toxic mix,” Steve Viscelli, a sociologist at the University of Pennsylvania and author of “Big Rig: Trucking and the Decline of the American Dream,” told Vocativ in an interview. “A lot of people think of truck driving as getting on the road and cranking up the tunes. It’s not.”

With more than 2,700 members, Truckers for Truckers offers an unvarnished look into the struggles shared by many long-haul drivers — and support by those who have also faced them. Talk can turn to marriage trouble and spats with exes, personal fears and rants about a rotten employer. There are laments for children’s birthdays missed and holidays spent alone.

The problems tackled by members, though sometimes seemingly commonplace, can become compounded or magnified by the bouts of extreme isolation endured on the road, drivers told Vocativ. It is not unusual for some to work 300 days a year, often putting in 12 or more hours at a stretch behind the wheel. During that time, most live and sleep in the cab of their truck, venturing out only for meals, showers, or to deal with customers. Human contact is rare under these conditions. Small worries can become crippling anxieties. Relationships can crumble.

“My fiancé is right on the brink of leaving me here at Christmas time,” wrote one young driver to the group during the wee hours of a Monday morning last month. “I’m in a tough spot trying to hold on to her but I feel like it’s too late. I’ve been back over the road for the last 16 months. I’m not sure how to cope with everything.”

The post elicited nearly a dozen responses. “I appreciate the comments everybody,” the man later wrote. “Definitely just needed to get it off my chest. You all know how easy it is to dwell on it when your [sic] on the road day and night.”

Often, the group’s comment threads are just the start of more intimate conversations. It is not uncommon for members to make themselves available to fellow drivers at any hour of the day by text, phone, or Skype. Encouraging those in great distress to seek counseling or other professional services is a priority. “If we can’t help someone, we’ll put them in touch with whoever they need,” Suson said.

Research suggests many in the industry could use the help. One 2012 study, published in the Issues in Mental Health Nursing journal, surveyed more than 300 truck drivers and found that nearly 27 percent of them reported having experienced depression — more than four times the national average among U.S. adults. Yet only five percent of those surveyed reported seeing a psychologist, counselor, or psychiatrist.

However, providing long-haul drivers with the mental health care they might need remains a vexing challenge, experts say. Long stretches away from home and irregular hours make scheduled appointments with a professional erratic at best. With a median annual salary of just over $40,000 a year — down from what industry analysts say was $110,000 in 1980 when adjusted for inflation— the cost of therapy or counseling can also be prohibitive. Meanwhile, many truckers continue to embrace a work ethic that places self-sufficiency above all.

“There’s a lack of resources in general,” said Buck Black, a licensed therapist in Indiana who specializes in counseling truckers and their families. To help close the gap, he often conducts sessions with clients who are on the road via Skype, text message, or phone. While Black believes more drivers should seek counseling , he also sees the value of online support groups. “If you just find one other person that can make all the difference,” he said.

For Don Combs, a long-haul trucker in Ohio, that one person was Suson. And he credits their meeting last summer with bringing him back from the brink.

Combs’ life had collapsed just months before, he said. A rocky relationship, strained further by his wayward profession, had ended right around Christmas of 2015. Combs had rarely seen his two young daughters since, which devastated him. He had no one to talk to and nothing but his troubled thoughts to consume him while he drove his flatbed rig 12 or 13 hours a day.

Combs, 37, stayed drunk during his downtime, he said. His thoughts turned grim. Things got even worse when a tonsil infection landed him the hospital around Father’s Day, another holiday he spent alone.”I didn’t want to live anymore, to be honest with you,” he told Vocativ.

Around this time, a friend of Combs’ had reached out to Suson through Truckers for Truckers and passed along Combs’ phone number. Suson’s call came near the end of June. “I was kind of apprehensive about pouring my guts out to a stranger,” he said.

But the two truckers talked for several hours that first night, Combs said. And they continued to stay in touch even after Suson convinced Combs to begin seeing a counselor.

“I’m not trying to be a celebrity off an issue that few people are talking about,” Suson said. “I’m just trying to do my best to help a fellow driver when he has nowhere else to turn to.