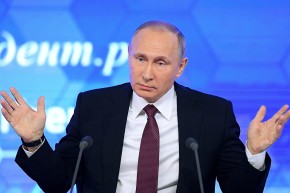 Sanctions Against Russia For Election-Related Hacking Announced
By Sara Morrison

Several individuals and entities have been sanctioned and diplomats have been kicked out of the country.

President Obama announced on Thursday what he called the “consequences” of “malicious cyber activity and harassment” designed to interfere with the presidential election that was directed by the Russian government, as well as an “unacceptable level of harassment” aimed at American diplomats in Russia.

Four individuals and five entities were sanctioned, including two Russian intelligence services, three companies that provided “material support” to those services, and four intelligence agents. Two additional Russian nationals were sanctioned by the Secretary of the Treasury; they were already on the FBI’s Most Wanted List for cyber crimes.

Additionally, two “Russian compounds” in Maryland and New York that were used for “intelligence-related purposes” were ordered to be shut down and 35 Russian diplomats have been ordered to leave the country.

The statement also warned that “these actions are not the sum total of our response to Russia’s aggressive activities” and said a report on Russian interference with the election (and previous ones) will be given to Congress in the next few days.

Following the announcement, the FBI and the Department of Homeland Security released a report on spearphishing campaigns it attributes to Russian intelligence, which “successfully compromised a U.S. political party.” The party is not named, but Russia is believed to be behind the hacks of the Democratic National Committee’s emails as well as those of Hillary Clinton campaign chairman John Podesta. The report lists several names the agencies believe to be associated with Russian intelligence, including Fancy Bear and Cozy Bear, nicknames given to the two distinct hacking entities cybersecurity company Crowdstrike identified as having gained unauthorized access to the DNC’s servers. The report indicates how the spearphishing campaigns were done but offers no proof that Russia was behind them. In October, the DHS and the Office of the Director of National Intelligence released a statement saying it was “confident” that the attacks were directed by the Russian government.

Russia has repeatedly denied being behind the attacks. President-elect Donald Trump has also said he does not believe Russia interfered with the election, adding on Wednesday that “we ought to get on with our lives.”