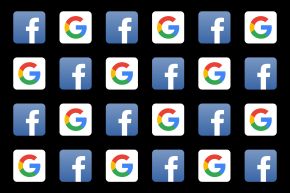 With more than 2 million apps available in the both the Android and iOS app stores and new apps introduced every year, you’d think there would be more diversity in end-of-year “Top Charts.” However, when it comes down to the apps with the most active users no one competes with Google and Facebook.

For the fifth year in a row, the two tech giants owned eight of the top 10 apps with the most active users per month, according to Nielsen data.

Nielsen’s latest digital consumer report shows Facebook is in the lead with the most users, which has been the case since 2013. Prior to its reign, Apple’s Maps and Google Search were the top apps for iPhone and Android, respectively.

The social network’s main app had more than 146 million average unique users each month, which was a 14 percent growth from last year’s 126 million.

The next four slots on Nielsen’s list are then occupied by other Google apps, which include Google Maps, Google Search, Google Play and Gmail. Facebook then takes the eighth slot on the list with Instagram, which was acquired for $1 billion in 2013. Instagram had more than 74 million average unique users in 2016.

Google and Facebook do cede the last two slots of the top 10, but to two other huge companies: Apple and Amazon. Companies like Uber and Snapchat, although very successful, aren’t on the list because their user base is limited. Snapchat is mostly used by younger generations and Uber is only available in urban areas (or it’s banned from certain cities). Twitter used to be on the list once upon a time, but the app has become less and less popular each year.

Apple Music was the ninth most downloaded app for a second year in a row — so basically it’s been doing well since it was launched in the summer of 2015. However, it’s interesting to see that Spotify — which has almost the double of paid subscribers — is not one of the top 10 most downloaded apps. Then again, Apple Music comes preinstalled on the iPhone and that clearly helps Apple automatically gain users.

Amazon also took a slot in Nielsen’s list this year with the Amazon app as the tenth most downloaded and used app.