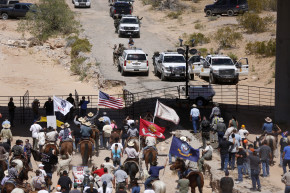 The decision by Obama to protect 300,000 acres of land in Nevada prompted new calls for confrontation among American militants

Anti-government militants erupted with fury and calls for an armed uprising after President Obama designated a new national monument in Nevada that includes the site of the infamous Bundy Ranch standoff between right-wing agitators and federal agents.

Members of the self-styled militias that swarmed to the aid of Cliven Bundy outside of Las Vegas in 2014 — and who later joined the rancher’s sons to seize a federal wildlife refuge in rural Oregon — said they were readying for another showdown. Obama’s move on Wednesday to protect 300,000 acres of federal land around Gold Butte, close to the Bundy ranch, comes as two dozen people await trials for their roles in the Nevada and Oregon standoffs, which emboldened right-wing militants across America and became a powerful symbol of anti-government sentiment.

“Get your gear ready,” wrote Jon Ritzheimer, one of the men who used handguns and assault rifles to hole up in Oregon’s Malheur National Wildlife Refuge for 41 days last year. “Obama just designated the Bundy Ranch a national monument.”

Others with ties to patriot groups and militia movements online responded with a bit more force. “Locked and loaded ready to go,” wrote Chris Border, a member of the Cliven Bundy’s Army! Facebook group, which boasts more than 2,000 members. “Tired of this crap and time to do something.”

Whether the tough talk turns into another armed confrontation remains to be seen. “So far it’s just been a lot of posturing,” JJ MacNab, an expert on anti-government extremism in the U.S. and author of the upcoming book “The Seditionists,” told Vocativ. “But members of these groups are looking for something to happen. They don’t really care what it is.”

A number of the militants who took part in the Bundy Ranch and Malheur battles, which drew international headlines, are behind bars.

Cliven Bundy and four of his sons are among the 17 people who will face conspiracy, obstruction, weapon, threat, and other charges following the showdown with federal agents in Nevada in 2014. The dispute arose after Cliven Bundy refused to pay more than $1 million in fees for grazing his cattle on government land surrounding Gold Butte. When the Bureau of Land Management tried to seize Bundy’s cattle, they were confronted by more than 1,000 anti-government protestors, many of them bearing weapons.

Last year, armed militants led by Cliven Bundy’s sons Ammon and Ryan seized the Malheur National Wildlife Refuge outside of Burns, Oregon, to protest the federal government’s control of public lands. While the Bundy brothers and five co-defendants were acquitted of all charges related to the occupation in October, another seven people will stand trial next year for their role in the standoff.

In a statement released Wednesday, the Bundy family lashed out at President Obama over his monument designation — but did not encourage a new showdown with the federal government. “This is about control, pure and simple,” the statement said. “You don’t love this land, you have never visited here, but you love being in control of this land.”

However, other militants are itching for a new battle and are calling on others to join them. “Prepare to saddle up patriots,” said Karl Koenigs, a veteran of both the Nevada and Oregon standoffs. “[It’s] Time for another win.”