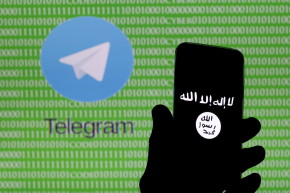 Telegram is favored by ISIS followers because of its encrypted communications

Telegram claims to block over 2,000 ISIS-supporting accounts a month — REUTERS
By Gilad Shiloach with Jacob Steinblatt
Dec 29, 2016 at 12:18 PM ET

Prominent pro-ISIS channels on Telegram, the messaging app that has become ISIS’ main social media platform, are advising followers to stop using the app for encrypted communication and “personal or sensitive” messages and move to another encrypted messaging client for Android named “Conversations.”

The call on ISIS channels comes after Telegram claimed this week that it blocks some 2,000 ISIS-connected accounts a month and an average of 70 channels every day. “Although Telegram is taking part in the electronic war against the Islamic State, many supporters are still fooled by Telegram’s security and rely on it in sending sensitive messages,” said a post being circulated on ISIS channels since Wednesday.

Telegram is currently ISIS’ main platform to disseminate online propaganda, claim terrorist attacks and recruit new members. It is also the place many members share manuals on how to make bombs and carry out assaults. According to news reports, the young men who killed police and a priest in France exchanged messages through the app.

Media outlets and terror analysts criticized Telegram for giving ISIS and other groups a safe haven to communicate. The Washington Post, calling it “The ‘app of choice’ for jihadists,” said that according to analysts that Telegram has “failed to adopt the aggressive measures used by its competitors to kick terrorists off its channels.”

According to The Post, just three days before the truck attack killed 12 in Berlin, senior members of the House Foreign Affairs Committee called the German-based company and its creator, Pavel Durov to take immediate steps to block ISIS content, warning the platform was being used to coordinate actual attacks. “No private company should allow its services to be used to promote terrorism and plan out attacks that spill innocent blood,” stated a letter by House representative.

Telegram responded earlier this week that “some media claimed Telegram did little or nothing to stop ISIS content from spreading on its platform. Nothing can be further from the truth: Every day we block over 60 ISIS-related channels before they get any traction, and over 2,000 channels are blocked every month.” In a series of posts, Telegram announced that “an average of 70 ISIS channels are terminated each day before they reach any traction,” saying it has blocked around 8,000 ISIS bots and channels since September 2016.