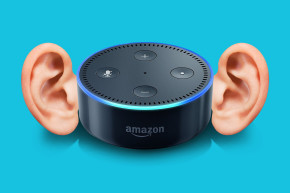 Amazon’s Echo Hears Everything You Say, And Police Want To Listen
By Janus Kopfstein

Amazon’s Echo Hears Everything You Say, And Police Want To Listen

In a first, Arkansas law enforcement are seeking access to data from the voice-activated smart hub

From the moment consumers started buying voice-activated “smart hub” speaker devices like Amazon Echo and Google Home, it was only a matter of time before police began taking advantage of the millions of homes that now contain always-on, internet-connected microphones.

In Arkansas, that time has arrived. For the first time, Amazon has received search warrants demanding access to audio recordings and other data transmitted to their servers by an Amazon Echo device, which uses voice controls to play music and interact with other “smart” home appliances. The warrants, issued by a court in Benson County, demand anything recorded by an Amazon Echo device belonging to a murder suspect during two days in November of last year, according to documents first uncovered by The Information. The suspect has since been charged for the death of a man found strangled in a hot tub.

Amazon’s servers store everything the Echo’s microphones pick up after the user speaks an activation word, using the audio data to train and improve the company’s speech recognition algorithms. But there’s technically nothing preventing the live microphone from also overhearing casual living room conversations. In the affidavit requesting an extension of the search warrant, police detective Josh Woodhams specifically notes the device stores recordings in its local memory and that it could be recording “possibly at all times without the ‘wake word’ being issued.” He also points out that ambient noise could have triggered the device to begin recording unprompted.

That means useful information might be extracted from the Echo device itself, potentially including “time stamps, audio files or other data,” the warrant application states. The documents say that while Amazon has has surrendered the suspect’s subscriber information, it had not turned over any voice recordings captured and transmitted by the Echo as of January 29, 2016.

In a statement emailed to Vocativ, an Amazon spokesperson declined to comment on the case, saying only that the company “will not release customer information without a valid and binding legal demand properly served on us,” and that it “objects to overbroad or otherwise inappropriate demands as a matter of course.” The spokesperson would not clarify when asked if Amazon considers the warrant for Echo voice data a “valid and binding” demand.

Despite enabling unprecedented corporate access to our private conversations, Amazon’s Echo has become extremely popular during its two years on the market, and Google is now rushing to compete with a similar smart hub called Home. Consumers have already filled their homes with 5.1 million Echos, and the always-on microphones sold out online during peak holiday shopping time earlier this month. In December, a major Las Vegas hotel said it would begin outfitting all its hotel rooms with the eavesdropping devices, allowing guests to control curtains and lights with their voice.

This article was updated on December 28, 2016 to include a response from Amazon.