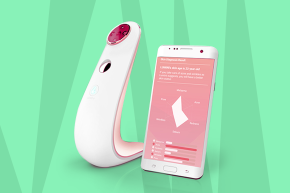 The moment you wake up, before you put on your makeup, Samsung will scan your face and make you highly aware of your skin flaws.

The South Korea tech giant is introducing two new beauty products at the 2017 Consumer Electronics Showcase next month that use a mixture of cameras, LEDs and nanotechnology to supposedly spot ugly skin issues buried beneath the surface.

The first product is called the Lumini, and it aims to detect “pimples, freckles and increased pores, wrinkles, redness and sebum.” The Lumini processes your skin by sending images to your smartphone. Based on the analysis, the Lumini app will recommend cosmetic products or dermatologist that can help you with skincare.

Samsung will also introduce the S-Skin, which is “a personalized IoT solution” that uses sensors to measure skin hydration, redness and melanin. The device uses that data both to deliver various wavelengths of LED light to the skin surface — a technique that is supposed to improve skin health — and sync with eye and skin patches that deploy nanotech “microneedles” that penetrate the epidermis and deliver anti-wrinkle and skin firmness treatments. The patches are equipped with near field communication and are used for firming, lifting, whitening and other skin troubles.

Although these two products seem kind of cool and straight out of a futuristic dystopian movie such as “The Hunger Games” or Scarlet Johansson’s “The Island,” high-tech beauty products also have a history of overselling their usefulness, so some skepticism may be in order. In addition, both devices seem to be heavily reliant on sending information to your phone and performing deep analysis, which might be concerning for some users.

Samsung has gained some infamy over the past few years because of faulty devices and shady privacy policies. From spying smart TVs to exploding smartphones, Samsung’s new devices must be solid in order for them to stand a chance in the market.

It’s a bit disconcerting thinking that a picture of your face, always vulnerable to being hacked, will be transferred to some ghost dermatologist Samsung connects you to. It’s still unclear when the product will launch in the U.S. (despite all the women in the commercial being white) or what the privacy policy will be regarding the personal data users must input to get skincare and doctor recommendations.