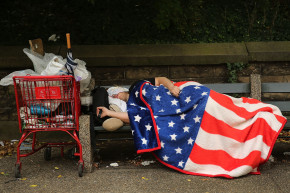 An Overlooked Challenge For The Homeless: Quality Sleep
By Alasdair Wilkins

An Overlooked Challenge For The Homeless: Quality Sleep

Being homeless means facing countless challenges, but one of the most basic problems comes at night: How to get a good night’s sleep from on the streets or in an overcrowded shelter? New research has found that lack of sleep could be a major reason why so many homeless people struggle to get their lives on track.

Sleep is one of the body’s most important natural processes, and not getting enough can have serious health consequences. Previous studies have linked not getting enough sleep with high blood pressure, heart disease, obesity, diabetes, depression, anxiety, lowered immune function and higher consumption of alcohol. Those are all issues that homeless people deal with — some at levels much higher than that of the general population — and any one of them could be an insurmountable obstacle to finding work or holding down a job. And that’s not even getting into more basic issues, like fatigue and general grogginess, that can put a person at a disadvantage.

“Sleep is important for good health and necessary to the ability to work and successfully perform daily activities,” a team of French researchers write in the new issue of JAMA. “Improving the quality and duration of sleep in the homeless may, therefore, improve alertness, health, and the ability to face daily tasks.”

The researchers used a survey to find out the sleep habits of about 7,000 people in French cities, half of whom were homeless. About 28 percent of the homeless respondents said they got six or fewer hours of sleep per night, compared with 18 percent for the comparison group. Overall, the control group averaged seven hours and nine minutes of sleep, about 40 minutes more than the homeless as a whole got at night and a full 90 minutes more than those not sleeping in shelters.

Solving the root causes of homelessness clearly involves far more than simply helping people get a better night’s sleep, but getting people in shelters and having shelters consider sleep an important service is a good start.

“Facilities could provide residents with sleep aids, such as earplugs, eye sleep masks, and pillows,” the researchers write. “Screens between beds could offer some sense of privacy, even in collective dormitories, and addressing issues of personal security should promote better sleep.” As they argue, simply making a point of keeping light and noise to a minimum — something most people take for granted as they settle into their beds — could make a real difference for the health of the homeless.