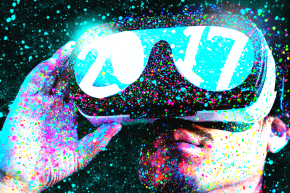 Virtual and augmented reality have been featured in sci-fi movies for decades, but it wasn’t until 2016 that a lot those concepts actually became a reality and placed in consumers’ hands.

By last year, we had a plethora of headsets that used virtual reality (VR) and augmented reality (AR), including the Oculus Rift, HTC Vive, Samsung Gear, Google’s Day Dreamer and Sony’s PlayStation VR. But they were still mostly used by tech enthusiasts. In 2017, this technology might truly take off to be more broadly adopted by the mass-market.

VR and AR, although similar, are distinct technologies with unique characteristics. VR lives strictly inside a headset and transports people to anywhere in real or imagined digital worlds. AR, on the other hand, layers digital objects on top of real-life settings. In 2016, the Pokémon Go app, for example, used the phone’s camera to bring virtual monsters into the scene in front of you, but the same technology could be useful in varied workplace and educational settings. Forecaster Digi-Capital projected in early 2016 that AR would significantly surpass VR in market size over the next few years.

Still, VR technology broke far out of the gaming world last year. Marriott Hotels used VR to promote travel to exotic locales and preview their suits. Media companies like the New York Times have packaged stories in VR, and Pornhub has been developing 360-degree “experiences.” Schools all over the world have used the Google Cardboard — which pairs to phones to enable viewing of VR media — to take kids on field trips around the world. Major brands such as “Star Wars” and Netflix have also started using Oculus Rift VR headset so people can watch movies in a virtual theater (bring your own popcorn).

These technologies are also picking up in the workplace. Tech Pro Research, a firm that looks closely into technology trends, recently conducted a survey to find out if companies have future plans of adopting AR and VR. More than a third of respondents said they were already using either or both, and, of those that are not already using it, 20 percent wanted to implement these technologies within the next 12 months.

In 2017, we may start to see the emergence of mixed reality, which combines AR and VR to completely immerse users into a world where they can summon holograms. An example of a mixed reality device being released in 2017 is Lenovo’s VR headset, which promises to support holographic projections. Such capabilities could be useful to, say, medical students, who could summon and manipulate visualizations of the human anatomy. Hollywood is also likely to jump on the technology (the Sundance Film Festival already accepts VR film submissions).

Magic Leap is another company promising a new experience in the virtual world. In 2016, the startup amazed everyone with its technology demo in which an employee uses his AR glasses to go through his Gmail, access YouTube and then fight an army of robots that comes crashing into his office. It’s unclear when the secretive company will release a product, which promises to bring new level of realistic viewing quality to augmented reality (critics have questioned the demo, speculating that it was created using special effects). But at minimum, we’ll most likely receive another preview in 2017.

In the meantime, major tech companies have pursued AR and VR at varying paces. In 2017, we can expect to see more from them, including from Microsoft, Facebook, Snapchat and perhaps Apple.

Facebook, which owns Oculus, has said the Oculus Rift device will eventually evolve beyond a gamer’s device. In 2016, it announced several features that will make the experience more social, allowing Rift users to take VR selfies, travel the world and hang out in virtual “dream” homes. It hasn’t revealed much of its 2017 plans, but meanwhile, a third-party company is working to make the headset wireless — so people can explore VR worlds without being tethered by a cord.

More Take A Trip Around The World In Virtual Reality

Microsoft plans to start 2017 by finally releasing its AR HoloLens headset into the consumer market — but in China. This gear is particularly exciting since it’s one of the first gadgets that fully supports AR since the failure of Google Glass — a poorly designed pair of glasses that initially cost over $1,000 and let users check their mobile notifications. The HoloLens will let consumers do things like summon virtual holograms, design objects and play “Minecraft” on top of their living room coffee table.

Apple has also started looking into the world of AR, according to reports and patents. In an Q&A earlier in 2016, Apple CEO Tim Cook said that AR is the future and it’s “going to become really big.” Apple acquired a German AR software company in 2015, but it hasn’t done much with the technology yet. It’s easy to imagine, however, AR features within the Maps app, camera filters that overlay objects or even a standalone headset similar to Google or Samsung’s. Snapchat’s parent company Snap has also expressed interest in these technologies, reportedly acquirng an Israeli AR tech company, Cimagine, that lets consumers visualize products they want to buy. Although Snapchat is not known as a hardware company, it could also potentially use AR to enhance its recently-released sunglasses with built-in cameras.

A big question is how much prices will drop for all new VR and AR devices, which will dictate how quickly they become mainstream. Prices have ranged anywhere from $99 (Samsung Gear VR) to $799 (HTC Vive). There are some cheaper alternatives, of course, such as the Google Cardboard, which costs $15. However, for now, the full VR/AR experience requires one of the headsets with higher specs and higher prices.